Full house for Verstappen at Spa 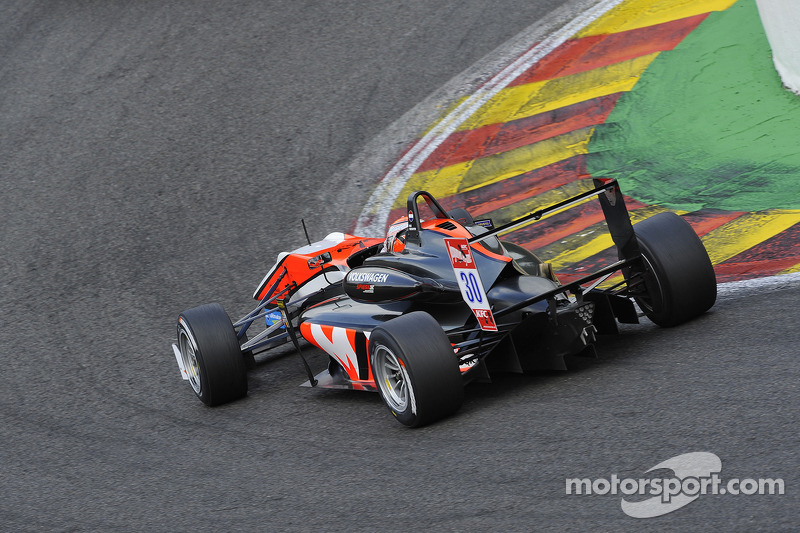 Esteban Ocon set the fastest lap of the race and remains the series leader.

At Spa today Max Verstappen (Van Amersfoort Racing) made it three out of three as the Dutch rookie won once more, an impressive feat on the majestic Ardennes track, especially as the teenager started fifth on the grid. 2nd place was taken by Esteban Ocon (Prema Powerteam), with Gustavo Menezes (Van Amersfoort Racing) claiming 3rd after a race-long battle with Felix Serralles (Team West-TecF3).

Ocon took the lead initially, though he lost it to John Bryant-Meisner (Fortec Motorsport), the Swede squeezing through at Les Combes. Ocon wasn’t’ impressed and fought back, while behind the two Verstappen had powered past Felipe Guimaraes (Double R Racing) and Serralles for 3rd as they tore into La Source for the first time. A lap later and Ocon was back in the lead having got ahead of Bryant-Meisner, but not for long. Verstappen saw his chance and passed both of them to move into the lead, again setting the move up on the run to Les Combes and coming out ahead.

Bryant-Meisner then promptly lost 3rd to Serralles who barged past the Swede (who drives for Serralles’ former team) through the Bus Stop, before Menezes also came through. The fight for 3rd was epic, but not as epic at the fight for the lead. Ocon had obviously decided he’d had quite enough of driving for points in race 2 and he set about Verstappen at every opportunity, a wheel banging incident leading to the French youngster being warned for dangerous driving. He also briefly retook the lead at Les Combes but the resulting wobble let Verstappen come back. It was proving to be yet another tensely thrilling race, especially for Frits van Amersfoort and Rene Rosin as their young charges fought it out.

Actually, Trevor Carlin probably wasn’t feeling too relaxed either, as his boys were having a tough time. Jordan King, who had started way back, got caught up in mayhem at the start and, with nowhere to go, lost a lot more ground. By lap three he’d clawed his way back up to 17th, but was a long way from here he would normally expect to run. It was as well that Jake Dennis was doing better… he’d made it to 9th and seemed to be enjoying Spa, while Tom Blomqvist (in the Jagonya Ayam Carlin car) was 13th and again looking to improve.

Shortly afterwards, while Verstappen and Ocon continued to scrap, Dennis edged past Felix Rosenqvist (kfzteile24 Mücke Motorsport) and, having advanced to 8th, started to look hard at Guimaraes, up in 7th. Blomqvist by now was not far behind and he too blasted past Rosenqvist, the Swedish driver’s weekend going from bad to worse. It would get worse yet, unfortunately for him.

Dennis, on the other hand, had made a new friend, passing Guimaraes at La Source on lap 6 to claim 7th, and then having to repeat the move a lap later, this time making it stick permanently. Guimaraes ran wide as he tried to defend his position and ended up letting Blomqvist through as well. Their next target was Bryant-Meisner.

Meanwhile Menezes and Serralles had begun swapping places like it was going out of fashion, neither of them prepared to give an inch. It was anyone’s guess how this battle would pan out. The scrapping had to stop though after Hector Hurst (Team West-TecF3) crashed into Antonio Giovinazzi (Jagonya Ayam with Carlin). Hurst was stranded on the edge of the track, his car’s suspension knitted into new and interesting shapes. The officials scrambled the Safety Car while they hauled the Dallara to safety. At the same time, Antonio Fuoco (Prema Powerteam) who had been loitering back in 18th, was called in for a drive through, completing a miserable weekend for Ferrari’s latest protégé.

Behind the Safety Car the order was Verstappen, from Ocon, Menezes, Serrallés, Nicholas Latifi (Prema Powerteam), Dennis, Blomqvist and Bryant-Meisner. By the time the wreckage had been cleared there was enough time left for three laps, so it would once again be a sprint to the line. The result was pretty brutal for some.

Dennis was mugged by Blomqvist at the restart, and was now demoted to 7th, while Serralles took 3rd place back from Menezes. Rosenqvist, meanwhile, walloped Guimaraes and deranged his own wing, then managed to shove the unfortunate Brazilian off the track altogether when Guimaraes had to brake early to avoid collecting the battling drivers ahead of him, Jules Szymkowiak (Van Amersfoort Racing), Blomqvist and Dennis, as they reached la Source with four laps to go.

It was now down to Verstappen to bring it home less than half a second clear of Ocon, while Menezes stole 3rd back from Serralles at Les Combes on the final lap of the race. Latifi was 5th from Blomqvist, Dennis, Szymkowiak, Rosenqvist and King. Giovinazzi survived for 11th, ahead of Roy Nissany (kfzteile24 Mücke Motorsport), Lucas Auer (kfzteile24 Mücke Motorsport), Sean Gelael (Jagonya Ayam with Carlin), Alexander Toril (ThreeBond with T-Sport), Santino Ferrucci (Eurointernational), Fuoco, Tatiana Calderon (Jo Zeller Racing), Mitch Gilbert (Fortec Motorsport) and Michele Beretta (Eurointernational). In 21st, was Dennis van de Laar (Prema Powerteam), leading home Richard “Spike” Goddard (ThreeBond with T-Sport) and Bryant-Meisner, who was a lap down after problems in the closing laps.

Ocon set the fastest lap of the race and remains the series leader, almost 100 points ahead of Blomqvist as they head to the weird and whacky Norisring street circuit next weekend.

Verstappen holds off Ocon for 2 out of 2 at Spa

King: I’ve never had to work so hard for just three points!