First pole position of the year for Felix Rosenqvist 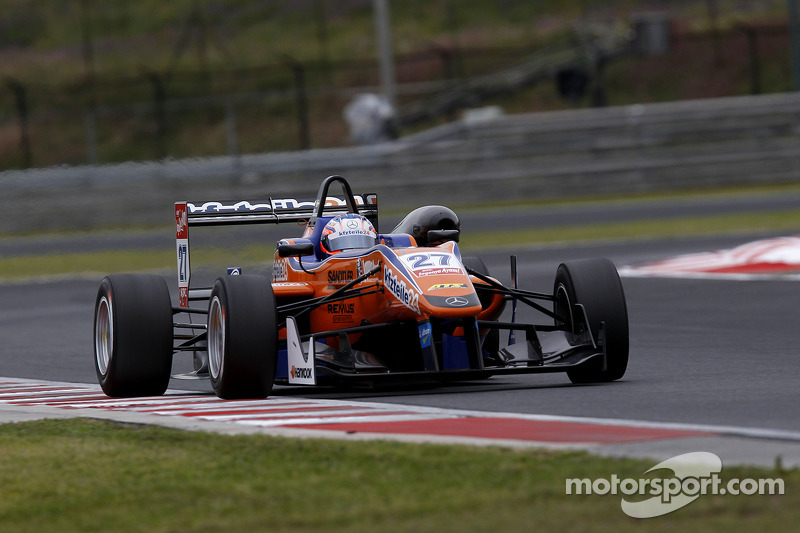 He had to wait until the sixth race weekend of the season, but finally, last year’s runner-up Felix Rosenqvist (kfzteile24 Mücke Motorsport, 0:48.082 minutes) managed to claim his first pole position of the 2014 FIA Formula 3 European Championship. At the 2.3 kilometres long Norisring, the Swede was a minimal 0.003 seconds faster than Esteban Ocon (Prema Powerteam, 0:48.085 minutes) and demoted the points’ leader from France, who started from pole position eight times so far, to second place. Max Verstappen (Van Amersfoort Racing, 0:48.093 minutes), the triple winner from Spa-Francorchamps, followed in third place, 0.011 seconds down, from Tom Blomqvist (Jagonya Ayam with Carlin, 0:48.262 minutes).

Next to the Dutzendteich lake in Nuremberg, the young FIA Formula 3 European Championship drivers staged a thrilling battle for pole position. Max Verstappen, the son of ex-Formula 1 driver Jos Verstappen, moved up to the top of the time sheets just before the halfway point of the 20 minutes’ session and defended this position until four minutes before the end. Especially Esteban Ocon attacked the Dutchman’s fastest time and finally beat it with four minutes remaining. However, the Lotus F1 junior driver wasn’t able to hold on to his position either; a few moments before the chequered flag was out, Felix Rosenqvist managed to complete an even better lap. Thus, the Swede secured himself the best starting grid position for the 16th season round of the FIA Formula 3 European Championship.

Felix Rosenqvist (kfzteile24 Mücke Motorsport): “The Norisring is a track where the set-up of the car has to be entirely different from permanent circuits and at such circuits, we are usually fast. Prior to the weekend, I already expected things to go well for me here. On the decisive final lap, I got it all together and it was enough to claim pole position. Now, keeping the speed up in the race will be very important, because otherwise, you can drop back easily at the Norisring. It will not be easy.”