Blomqvist masters the weather at Pau

Tom Blomqvist was the winner of the second of three races around the tight street course.

At Pau this morning a late attack by Tom Blomqvist (Jagonya Ayam with Carlin) saw him come home the winner of the second of three races around the tight street course, with Esteban Ocon (Prema Powerteam) just clinging on to 2nd at the flag in the face of a determined dive from Jake Dennis (Carlin) who finished a fraction of a second behind.

At the start the organizers wisely started the race behind the Safety Car and for five laps the 26-car field simply followed it like a string of multi-coloured ducklings as the drivers tried to warm up their tyres and find the line on what was a slowly drying track. When they were finally let loose, there was less chaos than might have been expected though Richard “Spike” Goddard (Three Bond with T-Sport) managed to skate off unprovoked and took his team-mate, Alexander Toril with him. Toril survived to continue to the end; Goddard was out on the spot.

At the front poleman Ocon was pulling away from the pack, with the exception of Felix Rosenqvist (kfzteile24 Mücke Motorsport), the Swede staying with the French teenager every inch of the way. Back in 3rd, Max Verstappen (Van Amersfoort Racing) was next to fall victim to the tricky conditions, crashing out of contention somewhere round the back of Parc Beaumont, while behind him Dennis van de Laar (Prema Powerteam) had started well but then lost ground to Jake Dennis and Antonio Giovinazzi (Jagonya Ayam with Carlin) dropping from 4th to 6th as a result. 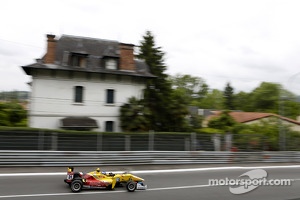 Another Carlin driver on the move was Jordan King (Carlin) who had been battling with Fortec Motorsport’s John Bryant-Meisner before finding a way past at Lycee. At the front though, Ocon was struggling to hold off Rosenqvist, the Swede making a dive for the lead at Pont Oscar when Ocon braked early. It didn’t work – he hit Ocon’s left rear wheel, and crashed out there and then while Ocon continued in the lead but found himself losing ground. His rear suspension was already damaged before Felix hit it and now he was in real trouble.

That promoted Blomqvist to 2nd ahead of Dennis, who was all over him, while further back Nicholas Latifi (Prema Powerteam) passed Bryant-Meisner, the latter not having the best of mornings. As Ocon clung onto his lead, and Blomqvist steadily closed the gap to him, the damp got the better of another pair of competitors when Felipe Guimaraes (Double R Racing) wiped out Tatiana Calderon (Jo Zeller Racing) by trying to squeeze up the inside at Lycee. As she was being craned away, Edward Jones (Carlin) lost it at Beaumont and finally the Safety Car had to be hauled back out.

This was the last thing Ocon needed. Without it he might have had a chance of maintaining his lead all the way to the flag, but now the whole pack was closing in on him. If he was lucky he might manage a podium, but as the car was increasingly running on only three wheels, it seemed unlikely that his luck would hold.

Once the debris had been cleared away the race went live with just over two minutes left on the clock and there was the heady excitement of a sprint to the finish. Blomqvist did not disappoint, making a bid for it at Gare and again at Lycee where he managed to make it stick. Now all Ocon could do was hang on for dear life and hope he could fend off Dennis for a few seconds longer. Luckily for him Dennis was a bit distracted by Giovinazzi who really, really wanted that 3rd place, and was having to concentrate on holding off his fellow Carlin driver on tyres that were a long way past their best now.

In the pack Latifi, King and Fuoco tangled, leaving a rear wing in the middle of the track, Latifi in the wall, and King out along with Fuoco. At least there was not enough race left for another Safety Car period. The clock was counting down, the field had one more lap to run, and Blomqvist came home to a well deserved win after a brave drive in mere tenth of a second. For a rookie who has never driven an F3 car in the wet before it was quite a drive.

Blomqvist was delighted with his win: “It’s my first time here in the wet and I didn’t have too much grip so I played it safe until the Safety Car came out and Esteban was struggling with damage. I didn’t know where I was, I thought Felix was still ahead then on the radio they said I was second, and I managed to pass Esteban and then just keep it on the black stuff.”

Ocon, on the other hand, had been engaged in damage limitation pretty much from the start: “I was fast in the beginning and had the same speed as Felix then I turned too early on the last corner and got damage on the car. At Pont Oscar I braked too early and Felix crashed into me which made the damage worse. Then the safety car came for 2 laps so after I was on the limit. If it had been 3 laps I knew I would not have finished on top of the podium but Tom overtook me anyway.”

In 3rd Dennis was wondering if he should have done things differently, but wasn’t exactly unhappy: “It was better than I hoped for my first F3 race in the wet. I tried to put pressure on Tom and I didn’t look after my tyres properly so I lost traction in the end but it was a shame there wasn’t one more lap… my first podium on a street circuit was fine. On the final lap I had to defend from Antonio, and I nearly lost it in turn 6 and ended up in the wall. Overall it was a good result for Carlin and points for myself.”

4th went to Giovinazzi, ahead of van de Laar, Gilbert, Auer, Serralles, Nissany, and Hurst. Bryant-Meisner finished outside the top ten in 11th from Beretta, Menezes, Agostini, Guimaraes (a lap down) and Toril (also a lap down). Rosenqvist at least set the fastest lap so it wasn’t a complete write off.