The more experienced driver got the better of Esteban Ocon, while 3rd place went to Jordan King.

Tom Blomqvist (Jagonya Ayam with Carlin) may have ruffled a few feathers at Silverstone this morning when he claimed a lights to flag victory in the first of 33 races in this year’s FIA F3 European F3 Championship. The more experienced driver got the better of Esteban Ocon (Prema Powerteam), while 3rd place went to Jordan King (Carlin) after a tense battle with the rookie Frenchman.

Ocon was top rookie from Antonio Fuoco (Prema Powerteam) who finished 4th overall, with Jake Dennis (Carlin) 3rd in class despite finishing 17th after a clash early on with Richard “Spike” Goddard (ThreeBond with T-Sport) meant Dennis had to pit for repairs. The start was on time, in chilly but dry conditions, and while Blomqvist held position, behind him Ocon, who had looked a little tardy at the start of the formation lap found himself with a birds’ eye view of a fast-starting King, the Carlin driver slotting in menacingly just behind Fuoco as they tore down towards Copse for the first time. It didn’t take long for King to find a way past the Italian to set about Ocon, while the pack shuffled round madly and Max Verstappen (van Amersfoort Racing) sustained bodywork damage that would force him into early retirement from his first F3 race. 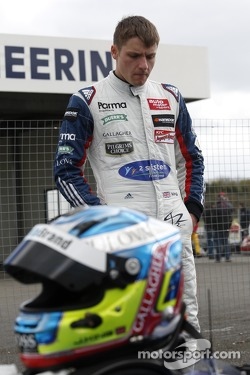 Antonio Giovinazzi (Jagonya Ayam with Carlin) ran very wide at Aintree on the first lap, while Goddard ran into the rear end of Felix Rosenqvist (kfzteile24 Mücke Motorsport), the Swede lucky to escape seemingly unscathed, while behind them Dennis wasn’t quite as fortunate and broke the front wing on the rear of the Australian’s Dallara. Seems Goddard is as ever involved in whatever accident happens. Some things never change…

As Blomqvist began to try and pull out a gap, Verstappen limped back to the pits, and Rosenqvist moved up into 10th despite the assault by Goddard. Behind Blomqvist, Ocon was busy holding off King, while Fuoco, Nicholas Latifi (Prema Powerteam), Lucas Auer (kfzteile24 Mücke Motorsport), Edward Jones (Carlin), Felix Serralles (Team West-TecF3), Felipe Guimaraes (Double R Racing) and Rosenqvist rounded out the top ten.

As Dennis pitted for a new nose, and rejoined a long way back, Michele Beretta (Eurointernational) and Alexander Toril (ThreeBond with T-Sport) clashed at Brooklands and needed to be craned away. Unsurprisingly, a Safety Car was required, which was where things started to go wrong, the pick-up of the pack proving less than smooth.

It took an apparently ridiculously long time to get the field rounded up and settled in and the debris had long been cleared away when they finally went live again. At the restart Blomqvist remained calm, despite Ocon almost on his shoulder, and was able to control the start, getting away cleanly and leaving Ocon vulnerable to King. Into the complex, King got ahead but Ocon resisted and was able to reclaim the place in short order. Another driver on the move was Auer, who set about Latifi with some enthusiasm that the Canadian probably felt was unwarranted! Latifi almost immediately then came under pressure from both Jones and Serralles who were utterly intent on making life difficult for the Prema driver. They ran three abreast through Luffield despite there not being enough room, and Latifi – with a decal flapping wildly on his front wing – held his nerve to hang onto his place.

The battle continued unabated between the three of them, with Latifi hanging onto his place no matter what the chasing pair could dream up in the way of overtaking attempts, the Canadian far less easy to intimidate than he was last year. As a result, in fact, Jones ended up losing a place to Serralles, while Latifi clung determinedly on to his place.

At the front Blomqvist was still motoring strongly on, not able to open a massive gap but still comfortably ahead of Ocon. It helped that King was still all over Ocon and was showing no sign of going away any time soon. All of that left Fuoco clear to set a series of fastest race laps as he battled to stay with the top three.

As the top placed runners settled in and steadied somewhat, the action kicked off further back, with the recovering Dennis and his bunch of pals fighting furiously over 18th place. Both Goddard and Dennis got by Hurst, who fought back hard, driving a very wide car indeed as he locked horns next with Agostini. Meanwhile, Gelael mugged Bryant-Meisner for a place, only for the Swede to be warned about his driving standards. He wasn’t the only one – Nissany was shown the flag too, which apparently calmed both of them down, Bryant-Meisner now concentrating on trying to hold back Menezes.

It didn’t mean the battle for 18th was over mind, not by any stretch of the imagination. There was a lot of pushing and shoving and a fair amount of attempting to go three, or even four, abreast which was fun to watch, even if the officials didn’t entirely approve. This became obvious when Hurst and Agostini were also warned for driving standards. Bizarrely, the Safety Car was also seemingly under investigation now, though it seemed more likely that the officials were concerned about what the drivers did during the Safety Car period.

Closer to the front Rosenqvist was 10th still – and no one at Mücke seemed to be able to figure out what was causing their dreadful lack of grip – but at least he was able to get the drop on Guimaraes for 9th. It was turning into a bad day for Felix, who really could have been expected to be a lot further forward. Instead, it was Blomqvist who was flying high in the lead, pushing now to try and open a gap if he could. He was looking interestingly sideways as he pushed for ever faster times, the car taking up some interesting attitudes as the English driver wrestled it through the corners. Of course given his dad, it’s possible that being sideways in a car is a hereditary condition.

Fuoco was a bit wild too, chasing the top three doggedly, while behind him Serralles was also kicking up dirt and looking more than a bit lairy as he too chased towards the finish, keeping Latifi in his sights but unable to find a way past. None of this trouble Blomqvist though, the Carlin driver setting a new fastest lap of the race as we hit the closing stages of the race and people started to find the rubber increasingly unresponsive.

In the ferocious battle at the back, Agostini found a way past Hurst for 21st, but it had now gone quiet, and – apart from van de Laar taking a long, hard look at Giovinazzi before realizing he wasn’t going to make it through if he tried, that was the race done. Blomqvist claimed the first race of the year with a margin over Ocon of just over two seconds, while King beat the second rookie home, Fuoco, by around a second.

Auer ended the morning race in 5th, from Latifi, Serralles, Jones, Rosenqvist and Guimaraes. Van de Laar ended up 11th from Giovinazzi, Gilbert, Goddard, Gelael, Menezes and Dennis (3rd in the Rookie Cup). Bryant-Meisner was 18th, from Jules Szymkowiak and Nissany. The last three to finish were Agostini (17th), from Hurst and Calderon.

Afterwards there was an extraordinary drivers’ briefing but no action was taken against anyone over the Safety Car problems.