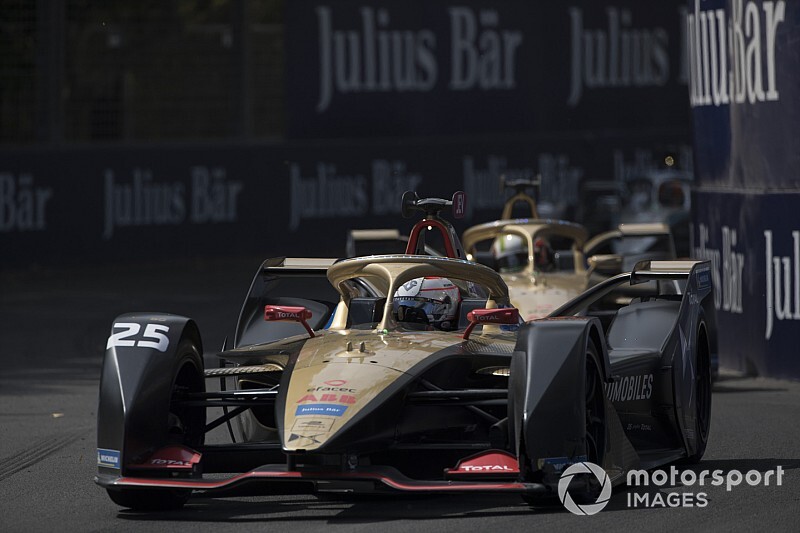 The reigning Formula E champion was recovering from 11th on the grid after a subdued qualifying performance for the team.

On lap five he was battling for seventh with the Mercedes of Stoffel Vandoorne, while also under pressure from Nissan's Sebastien Buemi.

As the trio approached the Turn 10 hairpin, Vergne was caught in a pincer as he collided with Vandoorne and as Buemi accelerated ahead, which resulted in damage on the front-left wheel fairing.

On lap 28 of 40, after Vergne had climbed to third, the bodywork began catching on the tyre to leave a plume of smoke behind.

In the process, he held up da Costa, nearly forcing him into the wall on the approach to the pit entry.

When asked if he knew of his teammate's presence behind, Vergne told Motorsport.com: "I was not aware, I had enough to manage with my wheel.

"[I was] trying to survive, trying not to hit the wall. I was still hoping that the front wing would come off and if it would have come off I would still certainly [have been in] with a shot at winning the race, so I was just racing."

"I could see it moving a bit, but I thought it would be fine. It was a surprise to see it breaking at the end.

"When I saw the smoke on the tyre I was like 'shit'. It was a shame because up until that point I had a crazy pace, really good."

Vergne opted not to pit to resolve the issue but was forced in to retirement on lap 32 following a message from race director Scot Elkins – an instruction he questioned.

"I had to stop because the race director instructed us to stop, which I don't understand because sometimes some drivers are banging the wall to try and remove the front wing," Vergne added.

DS Techeetah team principal Mark Preston told Motorsport.com: "I think because [Vergne] was thinking there's a lot of precedent in the past about how long can you go with a [damaged] body part, so we did obviously discuss with Scot and in the end he said 'no, you can't keep going'.

"You can go back over races where you might perceive the different things, different decisions are made.

"[Pitting and] changing the nose and everything at that point was so late in the race that [Vergne] would have been last."

"I lost a lot of time behind JEV unfortunately when he had the problem. I don't know why didn't make it easier for me," Da Costa said.