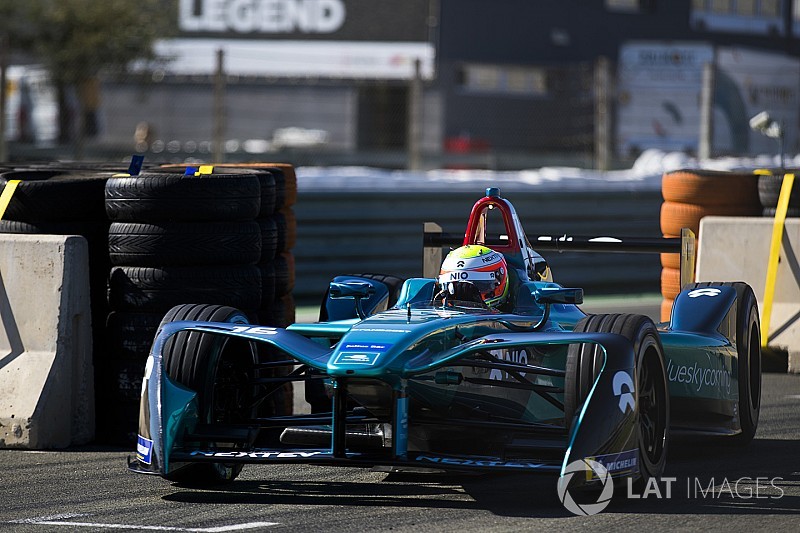 Oliver Turvey set the pace on the final day of Formula E pre-season testing, edging Sebastien Buemi for the best time around the revised Valencia circuit in the process.

Turvey topped the opening day of the test on Monday, but the layout of the Spanish track was tweaked slightly for Tuesday’s running when another chicane was added on the start/finish straight.

That added around three seconds to the lap, and on Thursday – after a one-day break for media activities – Turvey set a new record for the FE layout.

His morning benchmark of 1m21.822s outpaced Daniel Abt by a tenth on the day and was fractionally faster than Buemi managed on Tuesday.

Jean-Eric Vergne did not quite dip below the 1m22s barrier in his Techeetah entry, with Mahindra’s Felix Rosenqvist half a tenth slower in fourth.

Buemi set similar times in the morning and afternoon sessions, with his early 1m22.247s good enough for fifth, ahead of afternoon pacesetter Jerome d’Ambrosio.

Alex Lynn (DS Virgin) and Lucas di Grassi (Audi Sport Abt) were next up, making it four drivers and four manufacturers lapping within a tenth as testing drew to a close.

Nico Prost and a late-improving Mitch Evans completed the top 10.

Andre Lotterer caused a late red flag when he went off into the Turn 3 gravel with just over 10 minutes remaining and ended the day with the slowest time.

The retrieval of the Techeetah meant officials added five minutes to the clock, giving several drivers a late chance to improve their times – although only Jaguar’s Evans and Mahindra’s Daniel Juncadella improved their best for the day.

Mahindra tested Juncadella in place of Nick Heidfeld, who has travelled to Road Atlanta for this week’s Petit Le Mans.

Juncadella focused on race runs and was slowest for most of the session, before moving to 16th in the final moments.

In the fight between Mercedes DTM drivers for a Venturi drive, Edoardo Mortara outpaced Maro Engel, who turned up for one day of official testing after leaving his marriage celebration on Tuesday.

Venturi’s day was scuppered by recurring gearbox problems, and they ended up 17th and 19th respectively.