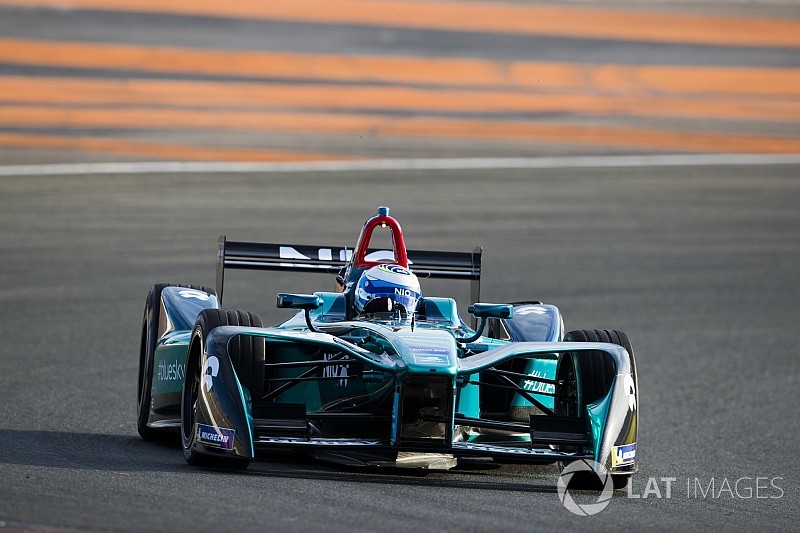 Oliver Turvey set the fastest time on the opening day of Formula E pre-season testing as barely a tenth covered the top six drivers at Valencia.

The NIO driver posted a 1m18.565s in the afternoon session in Spain to head a close sextet on the first of three days of official running.

Felix Rosenqvist also lapped within a tenth of Turvey in the afternoon, while Sam Bird – who set his best time in the morning – and di Grassi's teammate Daniel Abt completed the leading half dozen.

Bird's afternoon was compromised by a crash at the makeshift chicane on the start/finish straight.

The Briton was one of several drivers to complain about the chicane after the morning session and damaged one of his DS Virgin Racing DSV-03s in the incident.

He still completed a decent amount of running in the afternoon but did not put in a full-power lap and was just under two seconds off Turvey's pace.

Bird's teammate Alex Lynn also opted to avoid a 200kW run in the afternoon but his morning time was good enough for seventh fastest.

Jean-Eric Vergne caused one of several other red flags in the afternoon, spinning his Techeetah into the gravel at Turn 3, and wound up 0.451s off the pace in eighth.

Mitch Evans put Jaguar inside the top five in the morning and improved by a tenth in the afternoon to finish ninth, sixth tenths and fourth places clear of new teammate Nelson Piquet Jr, as Nico Prost completed the top 10 in the second Renault.

Rossiter and Mortara are vying for a race seat at Venturi, with Rossiter incurring damage at the same chicane Bird hit and Mortara stopping on track.

Rossiter was the quicker of the two, posting a morning lap time 1.6s off the ultimate pace and half a second quicker than Mortara managed in an afternoon session of restricted running.

Porsche LMP1 driver Lotterer suffered the same fate as Mortara, stopping his Renault-powered Techeetah on track, and wound up 12th fastest, half a second slower than Vergne.

Alexander Sims won the battle of the BMW-contracted men as he outpaced newly-resigned Andretti driver Antonio Felix da Costa – Sims was 15th, 0.010s quicker than da Costa, who will hand his car over to DTM race winner Tom Blomqvist tomorrow.

While Turvey was quickest, his new teammate (and Piquet's replacement) Luca Filippi was 18th, two seconds off the pace.

Lotterer's LMP1 teammate Neel Jani was slowest for Dragon Racing, but did not complete a qualifying run.