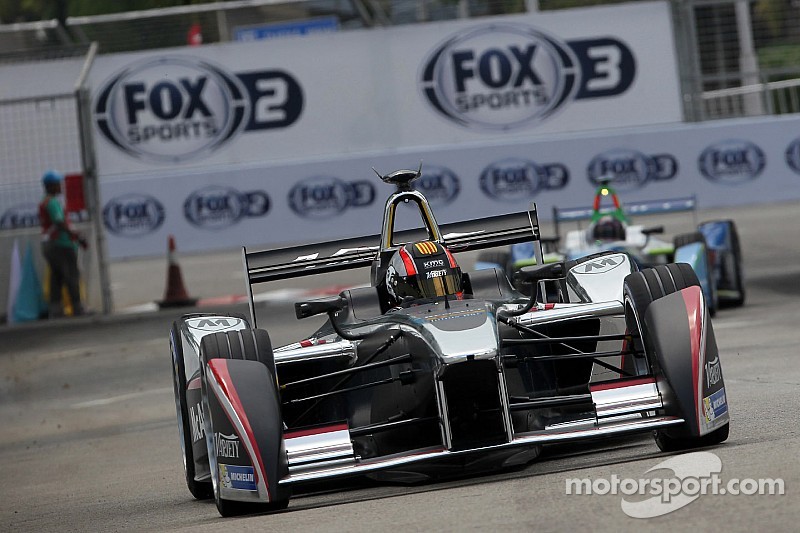 Nico Prost has earned back-to-back 'poles,' but he will start 11th for today's race.

The Beijing debacle continues to haunt Nico Prost into the second round of the FIA Formula E championship. He posted the quickest qualifying time with a 1:21.779, but a ten place grid penalty for that now infamous collision drops him to 11th on the grid.

As a result, Oriol Servia will start from pole position in an all Dragon Racing front row. His teammate Jerome d’Ambrosio will start alongside. A number of heavy hitters will start deep in the field due to issues during the qualifying session, which was an eventful one to say the least.

Daniel Abt kissed the wall with the left rear to kick off qualifying, but ended up as the early pole-sitter nonetheless. Bruno Senna seemed fast enough to take over the top spot, but he went ride in the final corner and lost his chance at it. A red flag ended the round one minute early, coming out for the stranded car of Nelson Piquet Jr.

Jarno Trulli took a run at the pole in the second group, but came a mere five 1/100ths short. Another red flag was needed and it was once again for a China Racing entry. Ho-Pin Tung spun, making slight contact with the wall.

Nico Prost threw down a blistering fast lap, but his glory was short-lived as Oriol Servia snatched the top spot away. Prost came back in the final seconds, regaining the top spot for the e.dams team. It was the only session that went red-flag free.

The final group of cars quickly dwindled as Beijing race winner Lucas di Grassi tagged the wall, damaging the right rear of his machine. As Jaime Alguersuari tried to race past the wounded car, he was forced wide and slammed the wall himself, suffering major damage. When qualifying finally resumed, no one was able to challenge the names at the top of the charts.