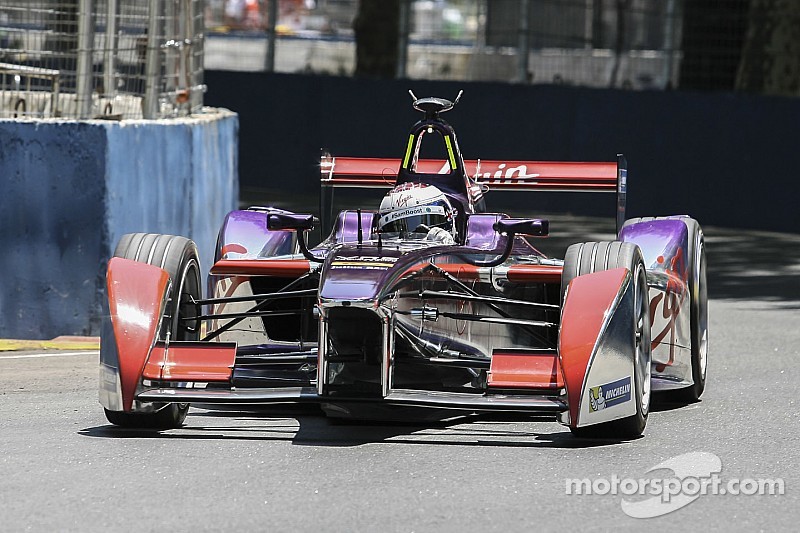 After a belated start, a quick-fire practice was action packed ahead of imminent qualifying session.

Virgin racer Sam Bird topped the first-ever Miami ePrix practice session, which had a delayed start and only ran for 30 minutes after problems finishing the track build.

Practice was due to start at 9:15am, but barrier work hadn’t been completed in time for that, and the track action was delayed until 11:00 – just over one hour before the rescheduled qualifying begins at 12:10.

It meant the track action was frantic from the start, as almost all the cars left the pitlane simultaneously.

Venturi duo Stephane Sarrazin and Nick Heidfeld were the early pacesetters, before Sebastien Buemi hit the top of the times, ahead of DAMS teammate Nico Prost.

Sarrazin retook the top spot halfway through the session, before Prost demoted him.

Karun Chandhok went P1 with six minutes to go for the Carlin-run Mahindra squad, but then Sam Bird took the first spot as Virgin founder Sir Richard Branson looked on from his pit garage.

“It’s a mega track,” said Bird. “They pushed so hard overnight to get this track ready over night. The big boss is here, and fingers crossed I can do them proud. Now I need to do the same in qualifying.”

Bird’s 1:06.588 was 0.101s faster than Chandhok, with points leader Lucas di Grassi third for Abt Audi. Another series race weekend debutant, Scott Speed, was fourth fastest for Andretti, ahead of Daniel Abt, Heidfeld, Prost, Liuzzi, Sarrazin and Jean-Eric Vergne.

The only major incident occurred when Heidfeld locked up and overshot Turn 1, and nosed into the wall as he appeared to struggle to find reverse gear.

Miami is the first Formula E track with no chicanes, and only has two kerbs on its eight-corner layout. There were no obvious issues with the track, although the pit exit is right on the racing line at Turn 7, which could cause some problems in the race during the pitstop cycle.