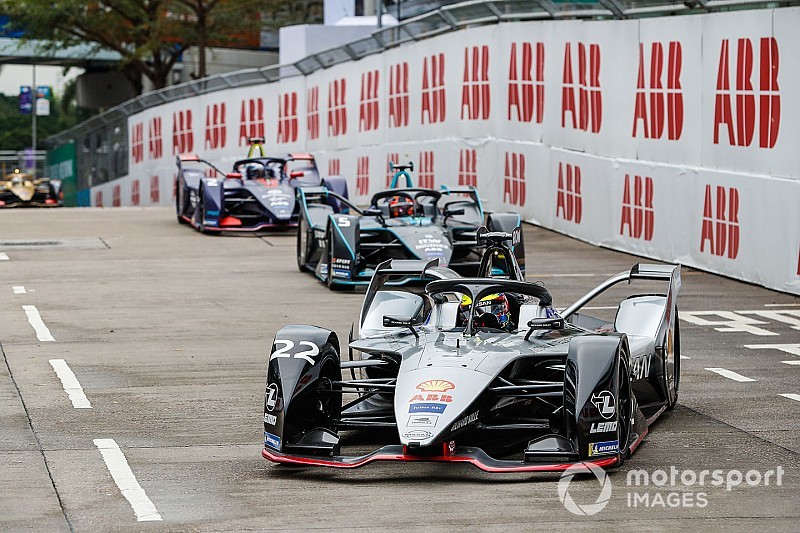 Rowland had qualified second behind HWA's Stoffel Vandoorne and passed his rival on the run to Turn 1 at the start of the race.

The Nissan driver held onto the lead until the first lap after the red flag called for the collision between Jerome D'Ambrosio, Pascal Wehrlein and Felipe Nasr.

Sam Bird then nudged Rowland into the Turn 1 hairpin, and the contact was enough to force Rowland into making his costly mistake.

"Sam caught the back of me in the middle of the corner, and as steering wheel - I lost it as he caught me - I activated the full-course yellow. When I got to 50km/h I couldn't go faster," Rowland told Motorsport.com.

"I thought it was the pitlane limiter, so it turned it on and off twice. Then I was just pressing buttons and it [the problem] went. You could do it 10 million times and it would happen once."

Rowland dropped from the lead down into 18th and began a recovery drive into the lower end of the top 10 before causing a safety car late on when he stopped on track due to damage.

"I smashed into pretty much everyone and every wall going and the car broke," he said. "I made a bit of contact with Daniel [Abt] and [Gary] Paffett afterwards so the car took a beating.

"At the point it broke I didn't touch anything, I need to check [the cause]. "

Rowland added that he did not blame Bird for the contact that caused his race to unravel.

The Virgin driver, however, was found to be responsible for a separate crash with Andre Lotterer later in the race, and was demoted to sixth.

"I don't think Sam really did anything wrong, sometimes it happens," said Rowland. "Everyone complains about this and that contact but you need to get used to it.

"Sometimes you get pushed, sometimes you push. What he didn't wasn't a penalty and I'm not going to cry from him touching me.

"I don't think this is my fault either, there's nothing you can do in that situation. Each race has been better and better and I need to keep going on."

Piquet: Jaguar a second slower than rivals in Hong Kong