Renault e.Dams secure points haul on the streets of Paris 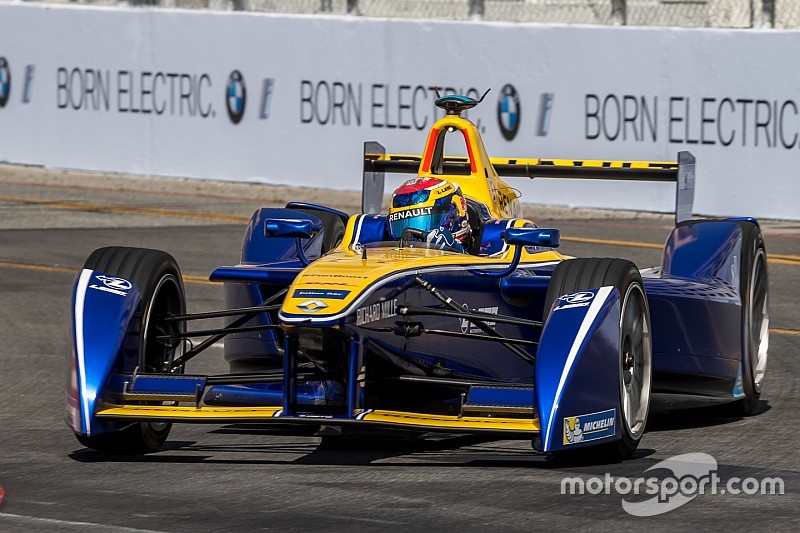 Renault e.Dams stand first in the Teams' Championship with 165 points

Renault e.Dams enjoyed a solid FIA Formula E Visa Paris ePrix with Sebastien Buemi finishing on the podium in third place and Nico Prost in fourth. Both drivers drove a strong and trouble-free race, which finished under a safety car deployed four laps from the end of the race. Renault e.Dams stand first in the Teams' Championship with 165 points, while Sebastien places second with Nico in sixth place for the Drivers' Championship.

Lining up on the grid in fifth and eighth place, both drivers sailed through a tight first corner unscathed and quickly made up a position apiece. By lap two, Nico was racing ahead in fourth place and Sebastien gaining quickly in P7. It wasn't long before the Swiss driver climbed higher up the ranking, overtaking Oliver Turvey on lap 9 for sixth place and Stephane Sarrazin on lap 18 for P5.

... when you start P8; finishing on the podium is always good.

Another overtaking move, this time on team-mate Nico, meant that Sebastien was running in fourth place and Nico in fifth when the time came to swap cars. A smooth pitstop from the entire Renault e.Dams crew ensured both drivers were easily returned to the field in the same positions.

An intense battle ensued over several laps between Sam Bird and Sebastien for third place, the latter using his FanBoost to no avail. A rare error from Bird allowed both Sebastien and Nico to progress to third and fourth place respectively on lap 40. The pair finished in formation, as did the rest of the field thanks to a safety car deployed for car-recovery purposes in the final stages of the race and which lasted until the chequered flag.

Early in the morning, in very cool temperatures, Sebastien topped the timesheets in non-qualifying practice 1 with a fastest lap of 1:02.841. Sebastien drew a place in the first session group and qualified P8 on the grid. Nico took part in the third qualifying session group and his 1:02.339 lap was good enough to take him through to the final qualifying session of the day: the Super Pole shoot-out. He qualified fifth for today’s race.

Renault e.Dams, Sebastien and Nico will next be seen in action for the eighth round of the 2015/16 FIA Formula E Championship, the FIA Formula E Berlin ePrix at Karl-Marx-Alle near Alexanderplatz on May 21.

#9 Sebastien: “It was a special race for us, as the Renault team it’s always special to be racing in France, so we tried to put on a good show and hopefully the fans liked it! Otherwise, it was a tough race, we really struggled to generate tyre temperature today and it was always going to be difficult to overtake on this track, but when you start P8; finishing on the podium is always good. Now I’m going to focus on qualifying as much as possible in time for the next race, in Berlin. I have a strong feeling that the car will do well there so we will see."

#8 Nico: "Finishing fourth is not bad even if I would have liked to have been on the podium today. The day hasn’t been easy for us as we didn’t have great pace during the practice sessions but us finishing third and fourth is better than we’d seen earlier in the proceedings. This result is very important for the team and our fight in the championship. There are only four races left in the season and we must come back very strongly. Today we raced in the street of Paris which was especially motivating and I was told that the images on TV looked fabulous. Fans discovered Formula E and I hope that the success of this race in Paris will mean that we will come back here next year!"

Vincent Gaillardot, Renault Sport Project Leader: “The team had a good result here in Paris today especially coming from a tricky weekend in Long Beach. We reviewed everything to make sure that we had a better performance level for this round. The conditions were a bit special with very low temperatures as well as low track grip which we had to adapt to but in the end we gained confidence again. The performance was there during the race and we need to understand how to improve qualifying, an area which we will focus on. Both drivers performed well today and we are looking in the right direction to win soon again.”

Alain Prost, Senior Team Manager: “I’m quite pleased with today’s result. Before we started the weekend I’d have said that maybe we wouldn’t be able to do so well today. However considering the pressure we were under and the issues we encountered in qualifying when we couldn’t make the tyres work, it's good to have finished the race without losing points in the constructors championship. It’s great to be on the podium, even more so as here in France on home soil, and especially for Sebastien who is still very much a favourite in the race for the title. For Nicolas, we came back with a good performance here, we can be very happy. We can also be proud of the event itself here in Paris. The crowd was amazing and it was a great show in our capital city. It was a big success for us and for Renault.”

Jean-Paul Driot, Senior Team Manager: “Today’s result was good in the end, taking into account where we started on the grid, but we saw again during the race that we had problems warming up the tyres, an issue we had throughout all sessions. We started the race behind the DS Virgin cars and in the first two laps we were three seconds behind however, warming up the tyres a little later we came back very strongly and I think that without the safety car we could have finished one step higher on the podium as we were more efficient than the cars in front. It showed that our tyres were more performant on long runs. We are gaining a little bit in the championship so in the end it’s been a good weekend for us and we must carry on working very hard to be on pace and arrive at the next round in Berlin to fight for the championship on both sides, drivers' and team.”

NEXTEV TCR to split with Campos for season three