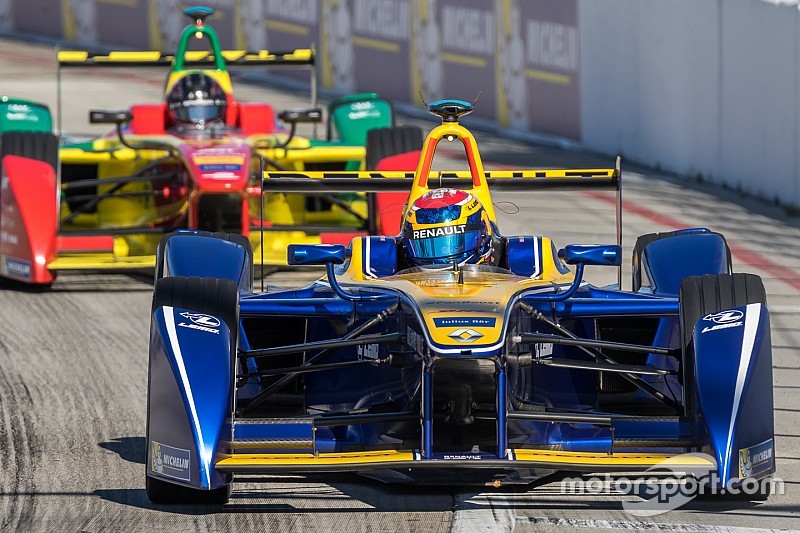 Sébastien Buemi closed to just one point of the Drivers’ championship lead.

Renault e.dams enjoyed a superb FIA Formula E Berlin ePrix with an emphatic victory from Sébastien Buemi and a strong fourth position from Nico Prost to give an extended lead over their nearest rivals in the Teams’ championship. Séb also closed to just one point of the Drivers’ championship lead after the eighth round of the season.

Séb started from the front row in second position, with team-mate Nico four positions behind. Both drivers made strong starts; Séb taking the lead and Nico making up one place to end the first lap in fifth. Despite losing the lead to pole-sitter Jean-Eric Vergne later on the first lap, Séb was soon able to retake the position a lap later and thereafter magnificently manage his car’s energy consumption, and the race lead.

Trouble-free swaps of their Renault Z.E.15s for both drivers saw Séb return to the head of the field and Nico jump a position from fourth to third. Séb was mainly untroubled for the rest of the race, save for the sprint following a late safety car period. Nevertheless, he kept his nerve to take the chequered flag first to cement his and the team’s third Formula E victory this season.

Nico meanwhile was embroiled in a three-way dice for position following his car swap, for most of the time the filling in an Abt sandwich with Daniel Abt ahead and Lucas di Grassi behind until drivers’ championship leader di Grassi made a move stick. Nico ultimately finished just shy of the podium in fourth.

Earlier in the day the Berlin ePrix had started well for Renault e.dams with Séb topping the times in the first non-qualifying practice session with a full power lap of 57.648secs, however it wasn’t all plain sailing as he damaged a front wing in the red flag interrupted second session. Nico was fourth fastest in the first session but just like Séb was unable to post a quick lap in the latter practice.

Nico drew Q2 for his qualifying run, setting the fourth fastest time in that group after running wide at the final hairpin on a lap that was otherwise a stunner. Séb went out in the Q4 group, set the fastest lap but was ultimately denied the top superpole time by just 0.016secs. Despite his best efforts, Séb was also shy of the race’s fastest lap by 0.142secs.

#8 Nico: “‘It was a very good race and I fought a lot, pretty much the whole way! I was very disappointed with qualifying as I think I had the pace to put it in superpole, if not on pole, but coming from behind made it interesting. I was fighting with Jean-Eric Vergne for a long time and I couldn’t afford to make any mistakes as the points are very important for the team. Finally I got past but then Lucas de Grassi was strong, particularly after the full course yellow. I could not hold him back too much as I needed to save my own energy. A podium would have been really nice but it is still a very strong result for the team. I’m now really looking forward to London. I had a difficult start to the season but we can start to think about P3 in the drivers’ championship if I have a good weekend, so my eyes are on that now.”

#9 Sébastien: “I cannot express how happy I am about this result. It is a lot of points for the championship and that is very important, but I need to focus and keep it together for the last two races. I got past JEV at the start but I was consuming a lot of energy so at some point I thought I needed to back off as if you consume a lot in the first laps you are going to pay for it in the next 15. JEV got back past but then after four or five laps he started to save again and that’s when I made my move. I could extend the gap but then backed off to try and save energy again and go for the fastest lap, but I just missed out. I tried again for the fastest lap with the second car but in the end I didn’t manage it so that’s the only disappointment of today. There was plenty of risk when the safety car came out, but fortunately I could hang on for the win. We should enjoy this result, the team has worked really hard and has done a fantastic job, but I’m already thinking about London and what we need to do!”

Vincent Gaillardot, Renault Sport Project Leader: “It was a good weekend, absolutely! After Paris we worked a lot during testing to understand our performance and be better prepared for this race. Everything worked well and we had a much better qualifying, even if it was not perfect. We knew we had been good in the races, but we needed to get back to the front of the grid and that’s what we have been able to achieve this weekend. The race was trouble-free in terms of reliability so we are back in business! Now the final in London will be very exciting...”

Jean-Paul Driot, Senior Team Manager: “When you win it is always a very good result, but this was a particularly nice race as we really fought for it. Both cars were very efficient and neither driver made any mistakes so the satisfaction is 100%. We had a lot of trouble in Mexico and Long Beach and then even in Paris so everyone was under pressure. When you are under pressure you lose some confidence, and it changes the balance in the team. To be very efficient, a team has to be cool and confident and I think we are back there now. The results are what we were expecting coming into this race, so I could not have asked for any more. The conclusion is that we are back in our game where we should always be.”

Alain Prost, Senior Team Manager: “It’s a very good weekend overall. We always want more but today was a fantastic result for the team. We are very happy and the drivers did a really great job. Over the last two races we have looked a bit average and we have done everything to stabilise the team. We’ve done testing, everyone has worked together very well and we came here very motivated to score a good result. Typically with Formula E, it has been difficult to get everything right. Practice was hard and it was very stressful as we knew that a good result was very important for both championships. We know that the Abt team are going to be tough in London but we have a bit more of a gap in the championship now. Our goal remains to be champion in both championships and we have to keep that in mind over the coming weeks.”

Renault e.dams, Sébastien and Nico will next be seen in action for the season finale ninth and tenth rounds of the 2015/16 FIA Formula E Championship, the FIA Formula E Visa London ePrix at Battersea Park on July 2-3.