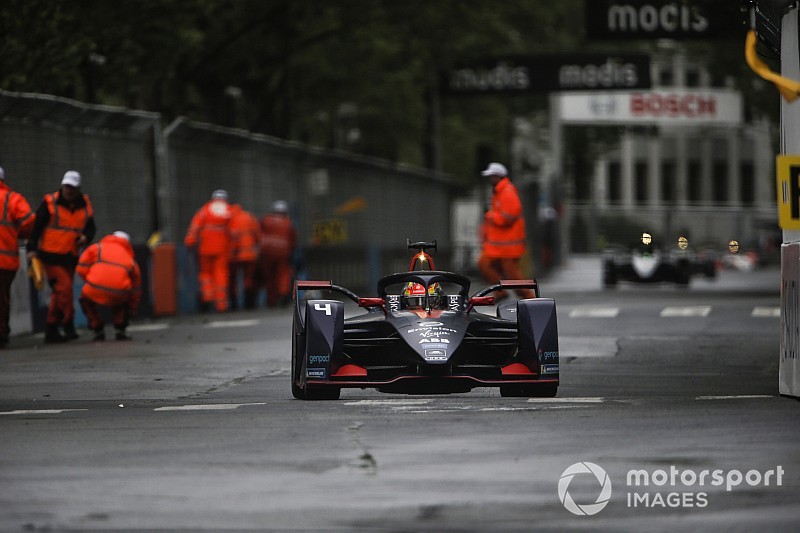 Polesitter Oliver Rowland was saved from challenges to his lead at the start because the race started under the safety car due to the changeable conditions causing the right-hand side of the grid to remain damp under the shade of the trees. But Rowland crashed out of the lead at Turn 10 when he locked up and collided with the barriers, falling to the tail of the field as his team-mate Sebastien Buemi charged past to take over at the front.

With Frijns now in second, the Virgin driver pressured Buemi – making contact at Turn 6 as the Nissan driver slowed to pull to the inside and activate attack mode. The contact on lap 6 of 32 was enough for Frijns to show concern over the radio, asking if his front wing was still intact as it appeared to be loosened.

Two laps later Buemi locked up at the tight Turn 9 as Frijns' first use of attack mode proved to be in vain in his pursuit of the lead. But on the next tour Frijns was able to surge into a lead he never lost as Buemi's poor Turn 8 approach and exit allowed the Virgin driver to move past. Buemi was then forced to pit with a puncture to complete Nissan's miserable day.

Rain soon arrived and led to a wild series of events that included four full-course yellows and a safety car period as drivers grappled in the worsening conditions, although Frijns never came under pressure.

Andre Lotterer was a lonely second for DS Techeetah while Audi's Daniel Abt was a surprise third place after benefitting from accidents around him.

Venturi's Felipe Massa had looked the favourite for third but spun out unaided midway through the race and fall into clutches of the midfield after losing a potential podium to Massa at one-third distance and being hit by NIO's Oliver Turvey. Massa had been in a robust battle for third early on the approach to the quickfire Turns 6 and 7 before Abt eventually pounced at Turn 3.

Abt's team-mate Lucas di Grassi was embroiled in the tight battle for fourth and came out on top against Dragon Racing's Maximilian Gunther, who secured the team's best finish in 2018/19.

Jean-Eric Vergne was sixth for Techeetah but was angered by what he perceived to be aggressive defending from Edoardo Mortara and then benefitted from a series of late clashes throughout the field. Antonio Felix da Costa was seventh for BMW Andretti ahead of HWA's Gary Paffett, Massa and Pascal Wehrlein.

Wehrlein and his Mahindra Racing team-mate Jerome D'Ambrosio had started on the back row of the grid after a tyre pressure infringement but rose through the field by keeping out of trouble for the majority.

By the 25th lap of 32, D'Ambrosio had made up 13 places to run eighth but hit the wall at Turn 3 and was classified 17th. D'Ambrosio led the championship coming into the Paris E-Prix and title rival Sam Bird was also caught out by contact when Alexander Sims, Alex Lynn and Bird all flew off the track at Turn 3.

Bird quickly rejoined but spun not long after and ended up 11th ahead of Oliver Rowland, who was caught up in multiple incidents as he attempted a recovery drive. Teammate Buemi ended the race in 15th ahead of Mitch Evans, who was forced into a front wing change early on after contact.

At the time of writing, multiple incidents are under investigation with Mortara's bungled move on Lynn at Turn 13 another late flashpoint.