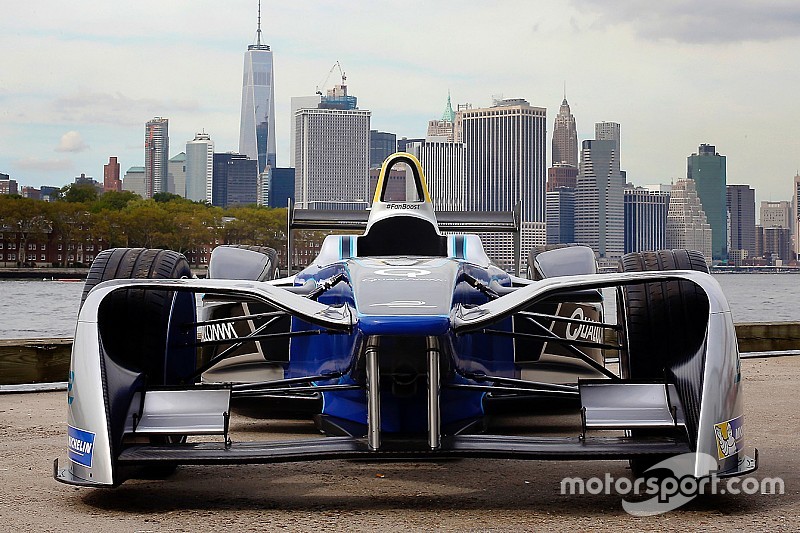 Formula E is set to beat Formula 1 to holding a race in New York. Sam Smith asks what that really means for the sport.

Many people, including Bernie Ecclestone, have nibbled at the Big Apple over the years in an attempt to hold an international motor race in one of the world’s greatest cities.

But Formula E boss Alejandro Agag has taken the first notable bite from it, and is savouring the sweet taste ahead of its 2017 debut on his schedule.

International motorsport is coming to New York. The holy grail of the racing industry, in terms of location and prestige, has been found.

Next July, Formula E will achieve something that so many have tried to accomplish yet failed.

Why it's a big deal

Why is a race in the city of Sinatra, De Niro, Warhol, Wall Street, Carnegie Hall and Woody Allen so prized? The answer is that manufacturers, sponsors and the people that make it pay will salivate over the marketing, commercial and brand opportunities that an event in the ‘megatropolis’ can provide.

Apart from the fact that Formula E is relevant to major car companies and their 10- and 20-year sales projections, hosting a race in New York is a sporting coup which transcends motorsport.

The circuit itself looks like a challenge, and one that will take in the spectacular backdrop of the Statue of Liberty and Lower Manhattan. Drivers are impressed.

“Fair play to Alejandro and his team. They have pulled the big one off and what was seemingly the impossible,” Sam Bird told Motorsport.com.

“It goes to show that the best cities on earth want Formula E, it’s a great endorsement with how far things have come in such a short space of time. At the end of the day it is a very desirable championship to have in a major city centre.

“Formula E has such a great USP. That is why I love it and that is why I am a proud part of it.”

“Formula E is doing what Formula 1 couldn’t do, and that is incredible. To race in New York will be a dream. No one has ever done it before, we will be the first and it already feels special.”

Beating F1 to the punch

Formula 1 has been trying to get a race in New York for 35 years. The first effort came in 1983 when a proposed race at Flushing Meadows, Corona Park close to Shea Stadium was close to becoming reality but ultimately failed.

Recently there was the stillborn New Jersey project which was to host a race around Port Imperial. A myriad of other potential projects have also fallen by the wayside, but now Alejandro Agag has made it a reality, subject to an FIA track homologation.

At the site of where the film On the Waterfront was set, Agag and his all-electric vision is now being seriously considered as a real ‘contender’.

The question often asked about Formula E is why it attracts big name manufacturers in the auto and electric vehicle world? With the New York race now a reality, joining prestige venues like Montreal, Paris, Berlin and potentially London once again, the questions should be asked no longer.

Formula E is delivering above and beyond what it said it would from the outset. The comparisons sometimes made between Formula E and Formula 1 are, at the moment at least, unnecessary.

Yet, in the future they could become more prescient.

Formula 1 will eventually have to embrace some level of advanced electrical engineering. Of course it already does to some extent with its current hybrid engines, but full electric drivetrains are likely in the next 10 to 15 years at the latest.

Racing simply has to keep relevant to what is happening on the roads and in society as a whole – especially when it comes to mobility and connectivity.

Renault, and its alliance with Red Bull Technologies, Williams Advanced Engineering, McLaren and Qualcomm are all names that are common in both series. Therefore, the comparisons are only natural, especially to the detached observer or casual fan, both of whom will be vital to the future growth of motorsport in the next two decades.

The interesting point, in the future of both championships, is what could be taken from each by the other, especially in terms of future venues. Will Formula 1 check itself and wonder why it is racing on a rural airfield in Northamptonshire when its future brother is in the heart of New York, Paris and Berlin?

The world is changing – fast

Society, and the way new generations are consuming, is changing at a pace never previously seen. Technology is driving that ever faster, and adapting to it will be the key skill for any big sporting event in the future.

At the moment of course it doesn’t need to answer that question directly, as well over a 100,000 fans seem to quite like that strangely evocative rural airfield in Northamptonshire, thank you very much.

But Melbourne, Montreal, Singapore and Monaco apart, F1 hosts events in some curious places – whether it is next to a water park on the outskirts of Budapest, a decaying concrete edifice in Sao Paulo or in a dictator’s shiny oil playground in Azerbaijan, each of these seems to thrive in their own sweet way.

The big questions will come if commerce starts to oscillate from F1 to Formula E, but it might take a decade for that to even start happening.

The evidence is that major manufacturers have not completely been seduced by Formula E, they have gone there of their own volition to sell their future technology in a cool way.

If the big money comes, as it surely must when manufacturers compete against each other, will Formula E be strong enough to manage it?

That is a question that will take more than a ‘New York minute’ to resolve.