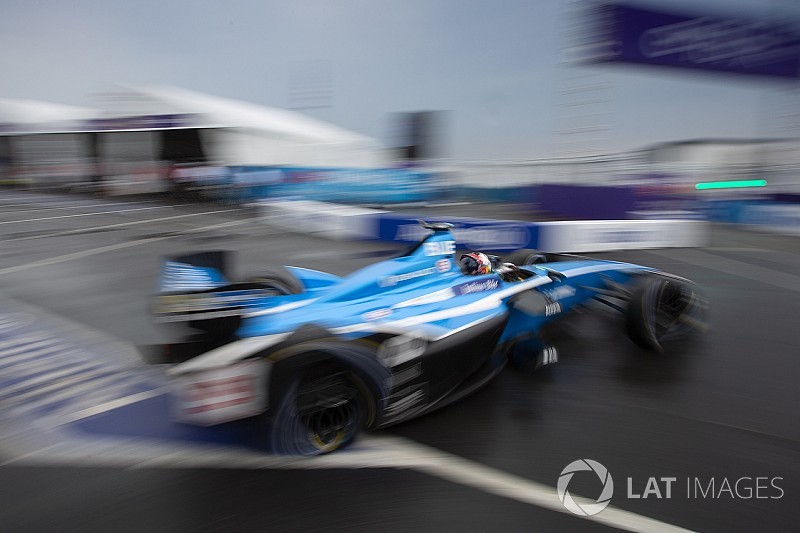 Renault’s Sebastien Buemi will start the final race of the fourth season of Formula E from pole position in New York.

Andre Lotterer and newly-crowned season four champion Jean-Eric Vergne will start second and third for Techeetah, which gives the Chinese squad an early advantage in its battle with Audi for the teams’ title.

Audi pair Daniel Abt and Lucas di Grassi will start fourth and fifth, with the latter topping the group running before crashing on his run in superpole.

The action took place on a wet track following overnight rain in New York that continued throughout Sunday’s single practice session and sporadically ahead of qualifying.

While some patches on the track were dry, it was damp all the way around the Brooklyn Circuit, with standing water at the heavy braking right-hander at Turn 2 and around the flowing new-for-2018 Turns 8/9/10 complex.

In superpole, Buemi negotiated his way around the course in a similary smooth manner to his performance to take pole in qualifying for race one on Saturday and produced a best time of 1m17.973s.

The Renault e.dams driver did not set any purple sectors, but did enough with personal best segments to claim pole ahead of Lotterer by 0.40s.

Vergne ran first in superpole, brushing the wall on the way into the rapid long left of Turn 5, and ended up third 0.058s behind Buemi. Abt produced a storming final sector but could not get ahead of the Techeetah drivers.

But di Grassi could not repeat his group-topping run, as he went into the barriers on his run in superpole as a snap of oversteer forced him to correct but the right rear of his car slapped the barrier at the outside of the corner.

During the group running little further rain fell and the track also did not dry up as more cars went out. That meant Lotterer was the only group four runner to make it through to superpole as Mitch Evans and Nelson Piquet Jr ended up sixth and seventh despite being the last drivers to complete their group flying laps.

Sam Bird could not join fellow group one runners di Grassi, Buemi, Abt and Vergne into superpole, and will start Sunday’s race from eighth.

Tom Dillmann, who starred in race one with a fourth place finish in just his second FE appearance of the season for Venturi in place of Edoardo Mortara, qualified down in 14th with his team-mate Maro Engel 17th ahead of Alex Lynn.

Oliver Turvey’s replacement at NIO Ma Qing Hua was 19th fastest as he clipped the barriers at the exit of the final corner and damaged his car ahead of his flying lap in group two, which meant he ended up 7.5s away from di Grassi’s best time in the first phase.

Turvey broke the little finger on his left hander as he clipped the same wall Ma hit in Sunday’s qualifying during second practice on Saturday.

Andretti’s Antonio Felix da Costa did not complete a flying lap as he had a technical issue that left him with no drive.