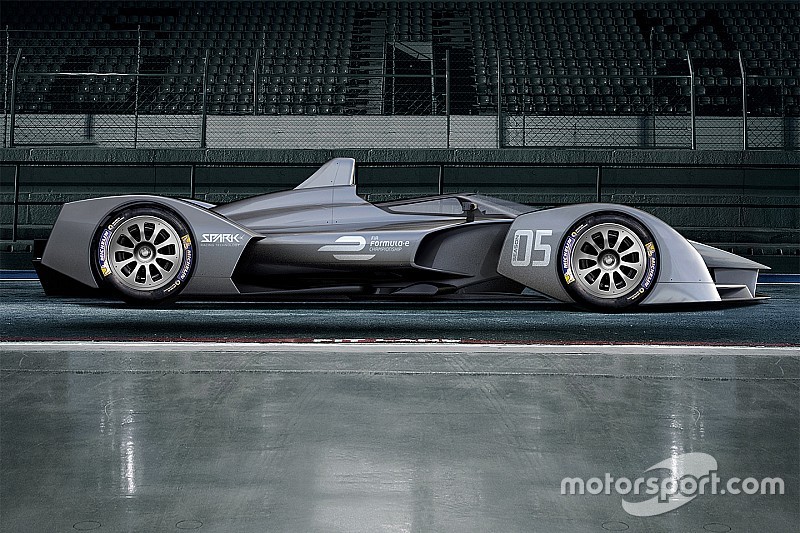 Reigning Formula E champion Lucas di Grassi says it is important for Formula E not to follow the design of traditional single-seater cars such as Formula 1 for its season five machinery.

The electric single-seater championship is set to introduce a brand new car for the 2018/19 season, with the design expected to include "surprises" according to FIA president Jean Todt.

The final version of the 2018/19 FE car is expected to be a departure from the concept images released by Spark earlier this year (pictured above).

FE’s current single-seater design was inspired by a desire to look like Formula 1 cars, so the series retained some familiarity when it launched in 2014.

However, di Grassi believes there is no reason to fear a move away from a traditional open-wheel design in the future.

"Closing the monocoque, protecting the driver, does not make it not open-wheel," di Grassi told Motorsport.com.

"Actually closing the wheel is much more efficient and the car looks more futuristic.

"For me, the main point that hasn’t been achieved with this [current] car is with an electric car you can come up with designs and with concepts inconceivable with an internal combustion engine.

"You can integrate the battery with the diffuser, have a lot of cooling by the fast air underneath the cars, have motors on the inside of the wheels – any idea.

"What’s important is not to replicate old ideas from racing for a series that could come up with something completely futuristic because of the technology behind it.

"I fully understand that for the current car they had to do something which was a compromise, but not for the future."

"Car will be massively different"

Existing supplier Spark will continue to build the 2018/19 FE car, which was shown to some key FE partners at last month’s Montreal season finale.

It could feature a radical departure from the classic single-seater shape, especially around the rear, and is also expected to embrace the halo cockpit protection device set to be adopted by F1 in 2018.

The car is expected to test privately this October before one car per manufacturer is supplied early in 2018 for private testing.

Di Grassi said: "The car will be massively different, it will look very cool.

"The car cannot be bigger [to ensure the racing remains good], it has to be a similar size.

"Its structure has to be a little stronger than what we have now so that we touch more, we race more.

"The design looks good, it does not interfere too much with aero – we don’t need much aero, who really cares if it’s a second faster or slower if the cars are the same?

"The aero has to be basic and not interfere with the racing and the car has to be efficient, strong and safe.

"If they come up with something like this, but the car looks a bit like Roborace – different, modern, not following F1’s preconceived ideas – that would be a success."