Nelson’s Column: I feel on top of the world! 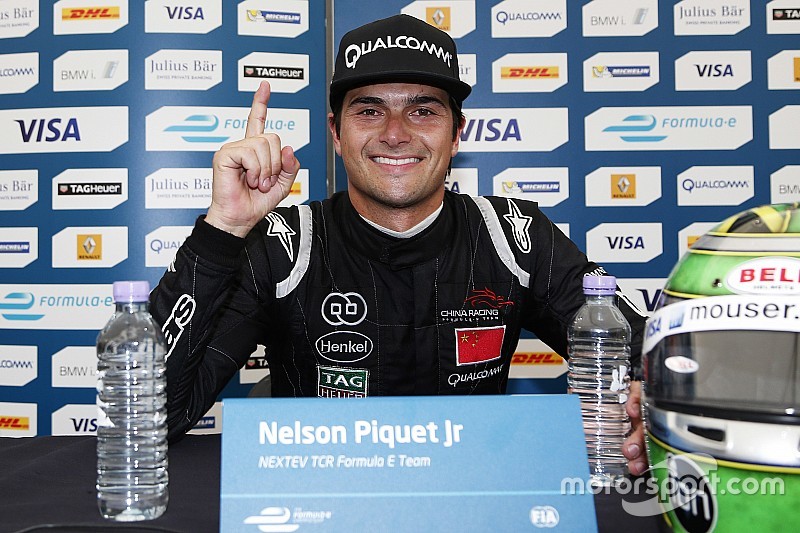 Motorsport.com's Nelson Piquet Jr tells all about his fantastic title success in the first-ever FIA Formula E Championship, winning the crown by just one point in the London ePrix finale...

Well, what can I say?! It’s been five days since I became champion of the first ever FIA Formula E Championship. I still haven’t had time to watch the race and I’m now back in the USA as I already have another race this weekend in Global Rallycross – no rest for me!

First of all, to talk about London as a whole: what Formula E did at Battersea Park by putting that race on was amazing. It was packed with people so imagine what it’s going to look like in two or three years’ time. I’m scared of how big this is going to get!

I didn’t know I’d won it

I can’t explain the feeling, I had to ask again if it was real and it was such an incredible emotion, it’s hard to put into words. It was definitely not an easy route to get there that weekend though!

We had gone into the weekend 17 points ahead but I knew that with 60 points on offer, it wasn’t going to be easy. I felt that Sebastien Buemi was the real threat, even though there were six of us mathematically still in it going into the double-header.

It proved even more difficult than I could possibly have imagined.

Buemi’s win made it tough

It got really hard after Saturday with Sebastien winning the race. It narrowed the gap to five points and we saw on Saturday that qualifying was the most important part of the race. Battersea Park is tricky, just the kind of track we all like, but it was nearly impossible to overtake, and the race on Saturday was pretty much decided from qualifying.

Based on that knowledge, qualifying on Sunday for the second race couldn’t have gone worse. I got drawn out in group 3, usually one of the better groups as the track tends to get quicker through the four groups.

But good old England decided to open the heavens with rain in my qualifying group, while it was dry for the other three.

I think it must have been karma for all the times I complained about rain in England! I promise I’ll never complain again!

It meant I qualified in 16th position on Sunday morning with Buemi in sixth. I was thinking that things could not get any worse and the race was going to be a very difficult job.

Taking a positive from a negative

On the positive side it took a bit of pressure away from me because I had nothing to lose anymore. I was at the back of the field, so we had an aggressive strategy and went out there to see what we could do.

The team told me to race my very best and we made the decision that I would ask no questions, and they would not tell me anything about the championship during the race.

I just had to go out and go for it so that’s what I did. At the end, learning I won by just one point, it couldn't have been tighter but I’m so glad we got it done.

The end of a long journey

It’s been a long journey and this championship has been really tough. Before the season I had to push really hard to get a drive. I only found out two weeks before the season that NEXTEV TCR would give me a contract, and even then it was only for five races and thanks to my sponsor Qualcomm.

Then we had a battle at the start of the season because, as a team, we were completely lost and had a lot of catching up to do. If you had told me I would win this championship I wouldn’t have believed you, I would have been shocked even to have a podium by the end of the year, but we turned things around quickly.

I adapted to the car really well, we got a good group of guys that really worked hard and trusted me and believed in me. We kept working, kept investing and things kept getting better and better.

Once we got our first win in Long Beach we realised we had a chance of winning the championship. It's been incredible.

Thanks to Steven Lu, Adrian Campos and the guys at NEXTEV TCR for believing in me and to the team sponsors Omnigear and everyone that has supported us. Thanks to Qualcomm as well for helping us in the beginning.

I also have to thank my personal sponsors: Qualcomm, Visa, Claro, Autotrac, Ion Cameras, Mouser, 100%, Alpinestars and Bell Helmets. I couldn’t do it without them.

And thanks to you too

I also need to thank the amazing fans, I’ve won the FanBoost six times this year and it’s really helped, so thank you everyone that has got involved and supported us and the series.

This is one of my best successes, I think even my best success. And this has opened my career again as I was able to show my potential on the world stage.

At NEXTEV TCR we showed that if you put a good group of guys together you are able to fight against manufacturers, you just need to be smart.

I enjoyed the victory for a few days but now I am straight back into work with the Global Rallycross championship this week at MCAS New River in North Carolina.

My job is to race and to win and I wouldn’t have it any other way!