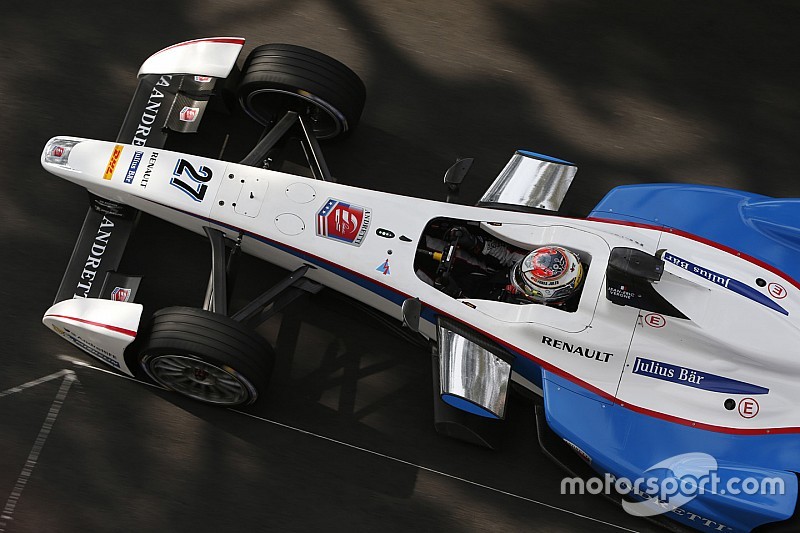 Jean-Eric Vergne will start from pole position for the Moscow ePrix, racing in the shadow of the world-famous Kremlin.

It is Vergne’s third pole position of the season for Andretti Autosport since joining the grid in Uruguay, and was achieved despite him clipping the wall at the final corner to beat points leader Nelson Piquet Jr by 0.02s.

“Our car is very well set up for tight, bumpy circuits and I love this track,” said Piquet. “It was a very good lap.”

Practice pacesetter Buemi was unable to respond after a scruffy final lap, which began with him tripping over his former F1 teammate Jaime Alguersuari.

He complained: “There are only five cars on the track, so I find it quite bad that I managed to find another – basically I couldn’t have a proper go on my second lap.”

Berlin winner Jerome d’Ambrosio then went third quickest overall, a tenth off Buemi, on his opening salvo in group two. “I had a bit of a moment on my second lap, got caught out by a bump,” he rued.

Nicolas Prost jumped up to fourth with a 1m10.043s, despite setting two fastest overall sector times but losing out massively in the final run to the finishline.

In group three, Lucas di Grassi jumped to second on his first flying lap with 1m09.685s. “I did a mistake on my second lap,” he said. “I think this result proves that the car is just the same as Berlin [when he was disqualified from the race victory].”

Vergne then topped everyone with his 1m09.429 despite clipping the wall on the exit of the final corner.

“I’m pretty happy with what we’ve done – it was very close with Nelson,” he said. “The last couple of races weren’t good, a couple of things needed to be fixed within the team and I’m pleased with the job they’ve done.”

Vergne will be joined on the front row by Piquet, with di Grassi and Buemi forming the second row.

D’Ambrosio will start fifth ahead of Prost, Daniel Abt, Nick Heidfeld, Jarno Trulli and Stephane Sarrazin.

Sam Bird suffered a disastrous practice, when a wheel feel off in the first session and a throttle sensor ruined his second. “I’ve done 15 per cent of what everyone else has done,” he complained, and will start 12th.

Loic Duval, who had crashed in practice, looked set for a top-10 qualifying position when his car suddenly cut out with just a couple of corners remaining. He will start from the final row of the grid.

Karun Chandhok performed an amazing high-speed 360-degree spin, and recovered to set the 17th fastest time on his final lap.