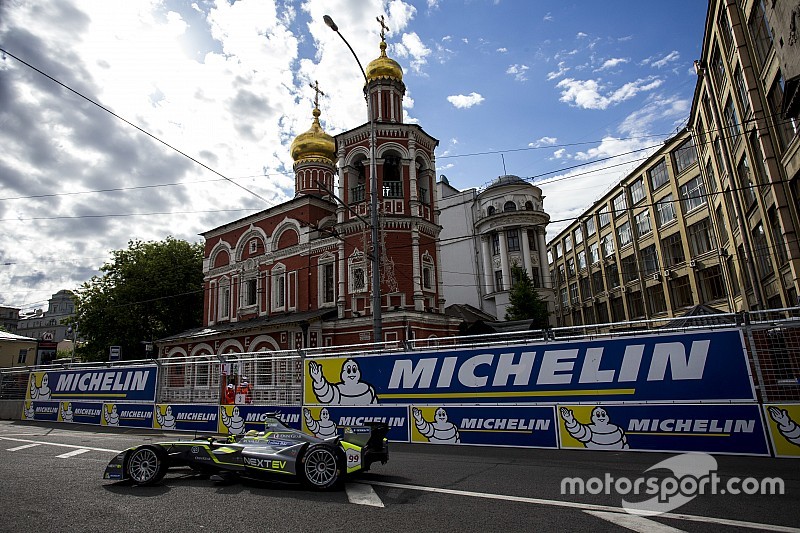 Nelson Piquet Jr dominated the Moscow ePrix on the streets of the picturesque Russian capital, the ninth round of the FIA Formula E Championship, to extend his lead at the head of the standings.

Piquet controlled the race from the start, and although he pitted to swap cars a lap earlier than most of his rivals after a charging first stint, he was able to nurse the battery of his second car to the finish.

From pole position, Jean-Eric Vergne – who is not in the title fight and declared before the race that he “doesn’t care about the championship” – got wheelspin off the startline and Piquet snatched the lead, with Lucas di Grassi in third ahead of Sebastien Buemi.

Piquet led by almost a second at the end of the first lap, with di Grassi tucked behind Vergne. Daniel Abt ran fifth, ahead of Berlin winner Jerome d’Ambrosio, Nicolas Prost and Nick Heidfeld.

Vergne set fastest lap on the second tour, closing in on Piquet and pulling away from di Grassi, but Piquet responded to extend his lead to 2.1s by lap five – despite using exactly the same amount of energy as his closest rival.

Vergne had di Grassi and Buemi right in his tow by this point, while d’Ambrosio hounded Abt for fifth. Buemi was doing the best job with his energy saving, over 8 per cent better than Piquet by lap 10 but he’d lost 5s to his title rival by that stage.

Piquet had a brief scare while lapping Sam Bird, whose troubled weekend continued when he was forced to swap cars on lap seven, but kept his pace high at the front of the race.

The top three in the championship battle were all rewarded with fanboost before the race. Piquet pitted on lap 18, using his fanboost on the in-lap, as did di Grassi and Buemi in their pursuit of Vergne as they stayed out for an extra tour.

Piquet’s stop was 60s, as was di Grassi’s but that was enough for di Grassi to leapfrog Vergne during the car swaps.

Buemi saved enough to put in an extra lap over his rivals, allowing him a ‘push’ lap out front in clear air. But this was wasted as his stop was 10s too long – the eDAMS team amazingly misreading the minimum car swap time as 68s not 58s – and he got released right into the path of Heidfeld.

Team co-owner Alain Prost admitted: “Very clearly we planned to do the pitstop in 68s, but I don’t know what happened, maybe a miscommunication in the team managers’ meeting. It’s not the way to go, for sure.”

After the car swaps, Piquet led by 5.9s from di Grassi, with Vergne another 1.2s back. Buemi was fourth, just ahead of Heidfeld and Abt.

Due to his earlier car swap, Piquet was always going to have to go slower in his stint to the finish. Di Grassi ate into Piquet’s lead, but at the cost of his battery, and they were within 4 per cent of each other with a 3.4s gap between them.

Piquet scored his second victory of the season, with di Grassi finishing 2s behind him. Vergne lost the final spot on the podium, as a disgruntled Buemi and Heidfeld both passed him on the last lap.

After multiple collisions between them on the final lap, Buemi passed him after he straightlined the chicane, and Vergne appeared to not accelerate on the exit.

Abt and the impressive Salvador Duran were next up. Prost finished ninth after suffering the same 10s extra car swap time as Buemi.

Bruno Senna spun at Turn 1, leaving his rear wing in the middle of the track as he rejoined. He finished 17th.

In other incidents, Jarno Trulli was a consistent offender at taking to the escape road at the chicane to keep first Antonio Felix da Costa and then debutant Justin Wilson behind him. His conduct will be investigated after the race.

Trulli was eventually rammed by Loic Duval at the hairpin, at the cost of his rear wing.