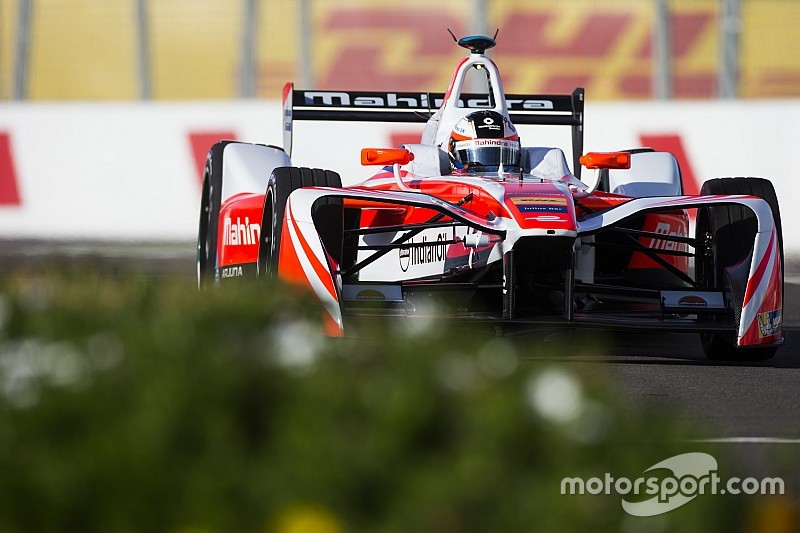 Formula E rookie Felix Rosenqvist will start from pole position for the Marrakesh ePrix after clocking the best time in the Super Pole session at the Circuit Moulay El Hassan.

The Mahindra driver continued his impressive baptism in Formula E by setting a 1m21.509s lap, beating three of his rivals after Jean-Eric Vergne was unable to even start his lap.

The Frenchman's Techeetah team got its timing wrong, as Vergne missed the 30-second window to head out for a lap.

Starting second on the grid will be championship leader Sebastien Buemi. The Swiss driver's Super Pole effort began with him missing the apex at Turn 1, but he made amends with a scorching sector two to ensure a front row start.

A concern for Buemi heading in to the race is his own personal fitness, a back complaint having troubled him since Friday morning. The reigning champion has not practiced any car-changing pitstops in order to rest the suspected muscle strain.

Claiming third was Sam Bird, who recovered from a practice accident this morning to set a best lap of 1m21.686s. Joining Bird on the second row will be Nelson Piquet Jr, who had a fraught Super Pole lap after missing the apex at Turn 1 after locking his brakes.

The bitterly disappointed Vergne will start the race from fifth on the grid.

The first group out in qualifying saw Nicolas Prost set the fastest time on a 1m21.777s lap in his Renault e.dams Z.E. 16. The Frenchman outpaced Andretti’s Antonio Felix Da Costa by 0.296s who will start the race from seventh.

Jerome d’Ambrosio was a disappointed fourth in group and 17th overall on the grid, while Ma Qing Hua’s Techeetah Renault brought up the rear after he failed to complete a 200kW qualifying run.

In the second qualifying group, Buemi’s 1m21.350s was over half a second clear of his group rivals. These were led by Oliver Turvey’s NextEV car on a 1m21.853s, enough to give the Brit eighth on the grid.

Third and fourth in the group were veterans Nick Heidfeld (Mahindra) and Stephane Sarrazin (Venturi). The pair will start 11th and 15th respectively on the grid.

Panasonic Jaguar Racing driver Mitch Evans set a 1m22.355s, which was good enough only for 16th on the grid.

Daniel Abt outpaced teammate Lucas di Grassi in the ABT Schaeffler Audi Sport Squad. The German put together a tidy lap to set a 1m21.725s best and place second in his group behind Vergne, but was later pushed out of the Super Pole session by Piquet Jr.

Di Grassi was three tenths back from Abt and will start 12th on the grid after making a mistake in sector one.

Maro Engel and Loic Duval were fourth and fifth in the third group. Engel will start 14th on the overall grid, while Duval encountered problems when he ran wide on his lap which was only set at 170kW after a problem.

The fourth and final group of qualifiers witnessed fireworks as Rosenqvist hurled his Mahindra around the 2.971-km track to set a 1m21.175s lap, just 0.182s off Vergne’s best in the group stages.

Bird set about making amends for his practice two accident with second best time in the group. The DS Virgin driver peaked with a 1m21.392s to get through to Super Pole, despite glancing the Turn 8 wall.

Robin Frijns was fourth in his group, and will start ninth just over a tenth ahead of teammate da Costa.

Adam Carroll locked the rear wheels of his Jaguar I-Type 1, and ran wide at Turn 1 on his qualifying lap. The lost time ensures that the Northern Irish racer starts from the rear of the grid.