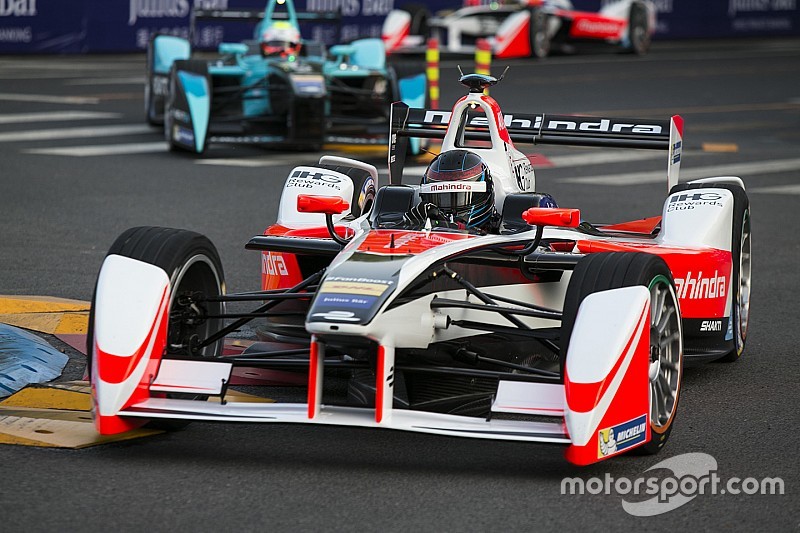 Mahindra will adopt a revolutionary approach with its challenger for season three of Formula E, having gone for a conservative design in the current season.

After all the teams ran spec-cars in the inaugural season, regulations were opened up for season two to allow manufacturers to develop their own drivetrains.

Solutions have varied from team-to-team, with Aguri and Andretti sticking with season one packages and NEXTEV TCR and DS Virgin going as far as employing two motors and a single gear.

Mahindra took the conservative side of the spectrum, having asked season one-suppliers Hewland and McLaren to build upgraded gearbox and motor as per its own specifications.

But for the upcoming season, when Williams introduce a new standard battery for all teams, Mahindra will have a revolutionary car in store.

“We’ve gone on record and discussed this. We said, ‘okay, from season one to two, we’ll do an evolution; season two to three, a revolution; season three to four, another evolution’ and season five is completely open,” Mahindra Racing chief Dilbagh Gill told Motorsport.com.

“This is the cycle we are following.”

Although Gill expects Formula E cars to become significantly quicker in the future, he has urged caution to ensure the development work isn’t made redundant when the sport introduces one car per driver in season five.

“From last year to this year, we’ve gone considerably faster. At the same place we want to keep pace with the idea of technology,’’ he said.

“We basically want to ensure that we don’t reach a stage where with two cars, it is so much faster that when we go to one car, suddenly the speed drops off.”

“We want to balance it out and go there.”

The Indian added that an easy way to make the cars quicker is to introduce slick tyres in place of current, all-weather compounds.

He, however, feels such a switch will deviate focus away from the power unit.

Despite being in its formative years, Formula E has successfully attracted multiple manufacturers from across the world.

Gill believes the very nature of the championship, i.e. electric racing cars, has been the luring factor for manufacturers, who acknowledge that the world will have to move away from conventional fuel in the future.

“If you look at any manufacturer, they understand electric is the future. That’s one of the reasons so many [manufacturers are involved],’’ Gill explained.

“I think electric mobility is a lot more democratic. It doesn’t have to be a traditional player to come and [develop an electric car].”

“Look at Tesla. It didn’t exist 10 years ago and where it is now. It’s got higher market capitalisation than the traditional big three of America - Ford, GM and Fiat-Chrysler.

“And then you look at firms like NEXTEV coming up and other organisations. So it’s very democratic.

“That’s one of the reasons why manufacturers are coming because they do realize this is something that this is a lot less capital intensive,’’ he added.

Top five in the standings

Gill aims to consolidate Mahindra’s fifth position in the standings, although much of his squad’s effort are already into the upcoming season, scheduled to begin in Montreal in September.

“I think we can give a consistent credible performance. Being in the top half of the championship will be pretty good for this season,’’ said Gill.

“Because our focus has always been season three. [In] season two, we’ve shown reliability, we’ve shown the development of the car.”

Senna Q&A: "Opening development in Formula E can be dangerous"

Heidfeld: "My wrist will never be as flexible as before"