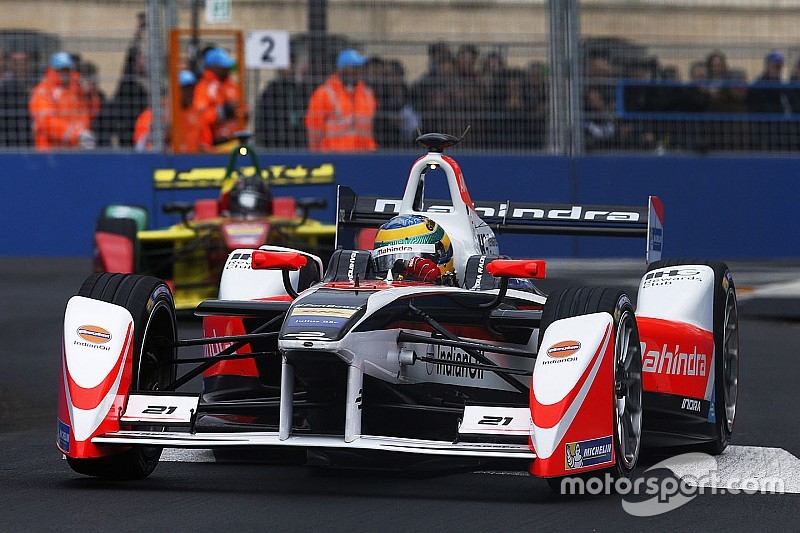 Mahindra Racing's team manager Joan Orus reflects on the Berlin ePrix, where exclusion from qualifying forced the outfit to make a quick change in strategy for the race to score vital points in the championship.

Mahindra caught everyone by surprise when both Bruno Senna and Nick Heidfeld made it to super pole, qualifying fourth and fifth respectively.

However, their joy was short-lived as both drivers were excluded for not adhering to the tyre pressures recommended by Michelin.

With the team forced to start from back of the grid, necessary changes in strategy were made to get the drivers back into points, as Orus explains to Motorsport.com:

What were your expectations heading into Berlin based on the work done in the simulator?

Joan Orus: An interesting track, quite short with only one chicane. It was very different to the chicanes we have seen in other races like Uruguay and Buenos Aires.

So the expectations as always was for qualifying in the top five. For the race, I think it was the longest from all the other rounds. It was done so that if the race were longer, it would be more interesting for the spectators with different strategies on display.

Having a fast car or a slow together on different strategy would only help the show and I think it was completely different.

So, it was necessary to really do well, on the strategy side and decide whether you want to be longer at the beginning or not.

Going into the weekend, the practice session was ok. But in qualifying both drivers made it into super pole. Were you yourself surprised with the result?

JO: No, I really thought that was possible. From the last three races and in Long Beach and Mexico we were really close to that. In France, it was completely different because of the 11C temperature.

But apart from that we have a car with it is possible to do it. And we are fighting during all the season to put the drivers into super pole. So, finally in Berlin it was possible and we were really happy at that moment.

What happened afterwards with the disqualification? When were you told about it?

So this means that normally after three laps or after five laps you achieve the minimum pressure. And if it’s less than 1.6 bars, you are not on the limit.

The problem is that in all the circuits, if you put 1.3 bars at the beginning, it’s no problem to achieve 1.6 bars. You do two laps and you are into it really fast but this track was different.

We don’t know why the asphalt was different and when we did two, three, four laps, we were not increasing very fast from 1.3 bars to 1.6 bars. And this was the real problem that after two laps we didn’t arrive at the minimum of 1.6 bars. So, this was the mistake we had done.

So, once the car is on track you can’t do anything to rectify the tyre pressures?

JO: No, I cannot do anything about it. All you can do is start a little bit higher at the beginning. Before qualifying, you have to decide not to start at the minimum of 1.3 bars but you start at 1.4 bars or 1.5 bars because it’s not enough in hot conditions to arrive at 1.6 bars.

When the car is on track you cannot do anything. It’s just that at this race it was a bit different and a surprise for us. We have done the same all the year, here it was not enough for minimum on all conditions.

Are both cars checked? Or only the one that is running in qualifying?

JO: Only the car that is running in qualifying that will be checked by the stewards.

Does it mean that the tyre pressure wasn’t the reason for you to go quick? Did you gain anything from it?

JO: No, we really think that a difference of 0.1 bars does not help us. The limit is only for safety reasons because if you go really low and hit a hard chicane or something, you can destroy the wheel and have an accident. So it’s only for safety reason. We don’t have any big advantage to gain by going a little bit lower.

So what was the exact tyre pressure figure recorded on the car?

When you were in the top five positions the aim must be to finish on the podium. How did the expectations change after you were disqualified?

JO: At that moment, we had a meeting. We called the engineers and the drivers to do a different strategy for the race, with one car going a little bit longer in the first stint and the other car to go longer in second stint.

So we got some points and we proved that the car was fast. And if we compare with the competitors that we can fight with them.

Can you explain what Senna has to do in this scenario to do the fastest lap?

So during some laps, it was possible to tell Bruno that it was not important to look for efficiency, energy consumption, here you can push to the maximum and you can go as fast as possible which is what is required to get the fastest lap.

Considering the circumstances, are you satisfied to come out with points?

JO: I’m satisfied to show that Mahindra have a good car and drivers who can fight for the points and we have the fastest lap - so on these items I’m satisfied.

But we think it’s possible to get more. We’ll constantly fight to get podiums because we have the drivers and an equally good team behind to achieve the target.

Would you blame anyone for the tyre pressure situation?

JO: For me it’s not a good decision from the engineers. It was a mistake. We have to understand that.

What are the expectations heading into London? Are you looking to consolidate fifth?

JO: We are not looking at teams that are just behind. We are looking only at the podium target. We have to be there. We have the team to do it.

We will fight in London to be on the podium and all the points we’ll collect to finish fourth position in the championship. So the target is to finish on the podium.

How Formula E has got manufacturers knocking on its door