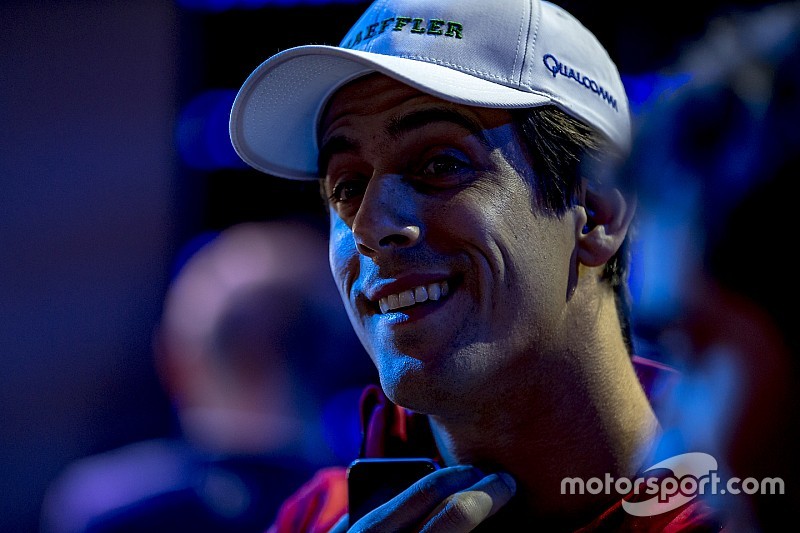 Nevertheless, the Brazilian gives a positive verdict in the interview and looks ahead to a return to the real race tracks.

The ABT Schaeffler Audi Sport Formula E team started virtually into the New Year: Lucas di Grassi and Daniel Abt gathered new experiences during the 1,000,000 Dollar Vegas eRace on race simulators. While Abt claimed ninth place in the 30 driver field, di Grassi was unable to start the main race due to a technical defect. Nevertheless, the Brazilian gives a positive verdict in the interview and looks ahead to a return to the real race tracks.

Formula E held a virtual race on simulators for the first time at the CES exhibition. What did you think of the Vegas eRace?

Lucas di Grassi: “It was a fantastic idea and a great event. With the eRace in some spectacular surroundings we reached an entirely new target group and certainly inspired many people for Formula E and the ideas behind it. This new era started successfully – the organization and the presentation were impressive. Now we have to keep working in order to continue perfecting the processes and obviously the software. This is important because everybody – irrespective of whether they are a professional race driver or fan – was full of ambition here in Las Vegas.”

The top positions were taken by fans with simulator experience who had qualified beforehand online, and especially Bono Huis who drove from pole position to take victory – as professional race driver doesn’t this annoy you?

“No, absolutely not. It was clear before for us pros that we would have a tough time – after all the simulator is more of a game than a real race car. The fans spend many hours with the software at home and as a result have an advantage, which we also struggle to compensate for with our racing experience. But we are quick learners and the technology continues to develop – perhaps things will look different next time out.”

The next ‘real’ race starts on February 18 in Buenos Aires. How’s it looking for your team in Argentina?

“The goals are the same as always: we also want to fight for victory in Buenos Aires and score as many points as possible. The track should suit our car, and our engineers have not just been relaxing over the winter break, but have developed many small details. In the Formula E calendar, Buenos Aires is something like a home race for me. I’m looking forward to the great support from my family, friends and of course our fans.”

How did you spend the short Christmas break since the last race in Marrakesh in mid-November?

“With a good mix of holiday in my homeland Brazil, training, time with family and friends, but also preparation for Buenos Aires. I’m looking forward when things on the race track get going again and the season finally gains a bit more momentum.”

After scoring a second and fifth place finish you are second overall as is your team. What is possible this season?

“We want to fight for the title again. It remains to be seen whether we achieve this target in the end, because it depends on so many unpredictable factors. With this in mind, we do everything even more meticulously from our side to be perfectly prepared. I believe that ABT Schaeffler Audi Sport deserves the title because everybody has been working tirelessly for this since the racing series was established.”

Formula E is now in its third season. How do you assess the development of the series?

“Formula E is developing faster and better than every other series in the world. I’m convinced that it will soon be one of the most important categories. For example, during the time spent in Las Vegas we saw the first sketches of the new car, which will be seen in action in the fifth season – it looks aggressive and spectacular. On top of this comes the new generation of battery, which will make changing cars redundant. Manufacturers, fans and the drivers are already impressed with Formula E – this will certainly increase in the future.”