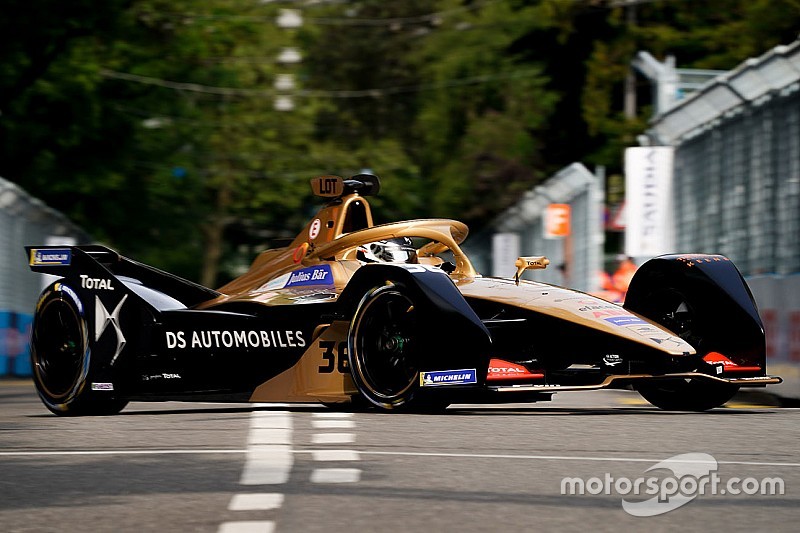 ABB FIA Formula E 2018/19 title contender Andre Lotterer has been hit with a post-Swiss E-Prix penalty that has demoted him from fourth to 14th in the final classification.

Lotterer earned the 22-second penalty for exiting the pitlane when the exit light was red, after he had pitted for repairs following the eight-car pile-up on the race’s first lap. He was put under investigation when the race resumed, where Lotterer's rose from eighth to fourth after by using attack mode later than his rivals.

An FIA bulletin explained that Lotterer's infringement was a breach of Article 37.1, which states that during a race a driver can only exit the pitlane when the exit light is green. Lotterer avoided earning points on his license because he received the information to go past the red light from his team.

But Lotterer now trails championship leader and teammate Jean-Eric Vergne by 44 points going into the New York double-header finale next month, and promotes Audi's Lucas di Grassi into second in the points.

"I asked ‘what should I do’ and then the team got the message that [said] all cars should join the queue [on the start/finish straight]. So I asked a few times and they said ‘yes, join the queue’. [I] went through the red light thinking that was what we had to do."

"The whole track was red [flagged after the Turn 1 pile-up],” he continued. "But we thought [exiting the pitlane] was what the race director asked us to do to help [the restart] procedures. Then the stewards gave me a 22-second penalty.

"It was extremely harsh because if anything it just helped [the officials] and it didn’t change anything. That’s how racing is nowadays – it’s not really about the sport but it’s about the rules."

Lotterer's penalty was one of several awarded following Saturday’s race in Bern, with Dragon Racing's Jose Maria Lopez disqualified from his 13th place finish. Lopez was disqualified for using a level of power usage of 224.03kwh on the 15th lap of the race, which is over the regulatory limit of 200kwh.

Venturi's Edoardo Mortara was given a five-place grid drop for the opening New York race for his part in a collision with BMW Andretti's Alexander Sims.

Sims's teammate Antonio Felix da Costa was hit with a post-race five-second time penalty for failing to respect the full-course yellow conditions, as he was briefly clocked at 54km/h during the caution period, but remains 12th.