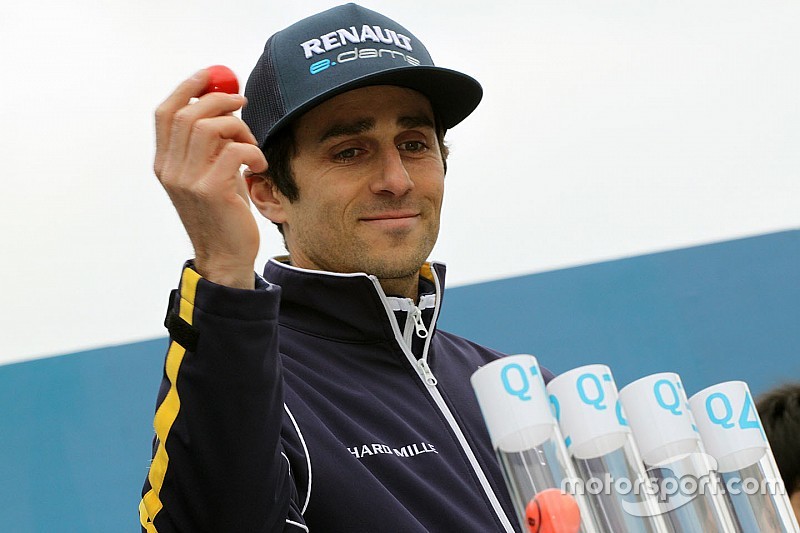 Nicolas Prost emerged with pole position at the conclusion of an incident-packed qualifying session for the first leg of the London ePrix, as rain left title contenders Lucas di Grassi and Sebastien Buemi well down the order.

The rain arrived midway through the second segment of qualifying, by which time only four drivers had set a representative laptime: Prost, Oliver Turvey, Bruno Senna and Robin Frijns.

As such, that quartet made up the superpole contingent, as Jean-Eric Vergne - who had set the fifth best time - was unable to compete, having damaged his DS Virgin car in a crash during the opening group.

With track conditions rapidly improving, Frijns was first to set his time, setting a benchmark of 1m29.500s that was swiftly demolished by Senna, who posted a 1m27.758s.

Turvey was the third man on track, but failed to best Senna's effort, slotting between the Brazilian and Frijns, before Prost grabbed the top spot with a 1m27.192s, just over half a second clear of the pack.

Vergne starts fifth, ahead of the three drivers who set their times in the damp-but-drying conditions of Group 4: Daniel Abt, Sam Bird and Nick Heidfeld.

Bird's failure to take pole position however means his slim mathematical chances of taking the title are now over.

Stephane Sarrazin was another driver to hit the wall, doing so in Group 2 after clipping the inside of a chicane with his front-left wheel, bringing out the red flags for a second time - but still set the ninth best time.

Title fighters Buemi and di Grassi both got the worst of the conditions in Group 3, adding further drama to their championship battle.

Both were bested however by Loic Duval, who set the best time in the third group to take 10th.

Simona de Silvestro and Mike Conway were responsible for the third and fourth red flags running in Groups 2 and 4 respectively.

After spinning prior to the red flags caused by Sarrazin's crash, de Silvestro got a second opportunity to set a time, but spun on the wet track surface and nosed the barriers, relegating herself to the back of the grid.

Conway, meanwhile, misjudged his braking and went straight on into the barriers on his hot lap, and will start down in 15th. In the same group, Nelson Piquet Jr was forced to abandon the session with a minute to go, and starts in 17th.