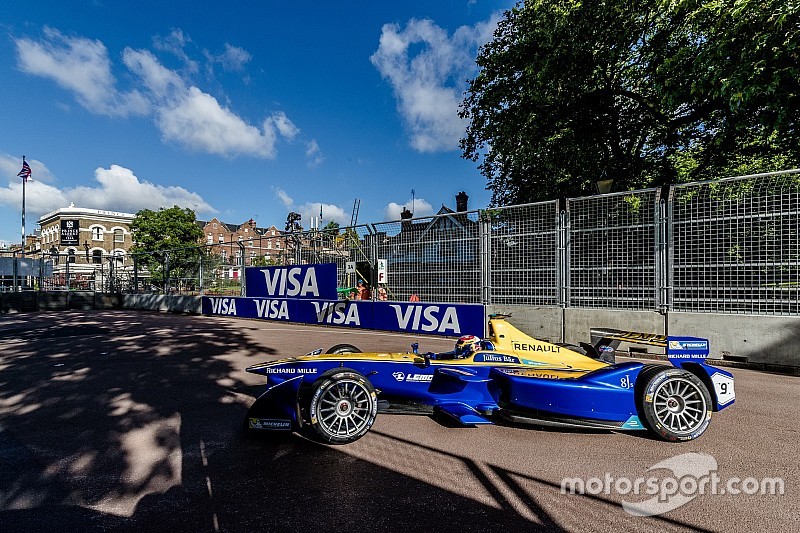 Sebastien Buemi will start the title-deciding second leg of the London ePrix from pole position, drawing level in the championship with title rival Lucas di Grassi in the process.

In the superpole showdown, Buemi was last on track having set the quickest time during the group stages - which, unlike on Saturday, were all held in totally dry conditions.

And the Swiss driver produced a flawless tour of the Battersea Park circuit, a 1m22.033s, to take the top spot on the starting grid and the three points that come with it.

Buemi will have Renault e.dams Nicolas Prost alongside him on the front row, the Frenchman lapping slightly slower than he had managed in the group stages with a 1m22.948s.

That was enough to beat di Grassi by just 0.027s in the battle for second on the grid, despite the Brazilian improving by three tenths compared to his earlier effort.

Oliver Turvey was a remarkable fourth in the NEXTEV TCR car, albeit 1.6s off the pace of Buemi in superpole, with Nick Heidfeld's Mahindra completing the top five a further 1.1s behind.

Daniel Abt will start sixth, missing out on a place in superpole by a tenth and a half thanks to Turvey's sensational effort in the fourth and final qualifying group.

With Buemi and di Grassi tied on points, Sunday's race will be a winner-takes-all affair - although di Grassi would win on countback should both men fail to score points.