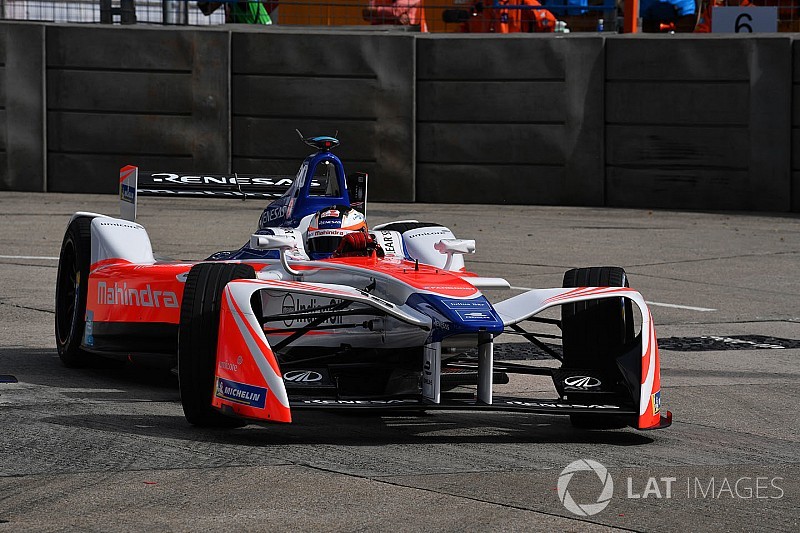 Rosenqvist set purples times in sectors 1 and 2 and managed to avoid the barriers when he oversteered in the final part of the lap to set a time of 1m02.836s.

Mitch Evans went quicker than Rosenqvist in the final two sectors, but fell 0.054s short of taking a shock maiden pole for Jaguar.

Evans then had his superpole time removed for exceeding the maximum allowed 200kW of power, dropping him down to fourth on the grid.

Edoardo Mortara put on a stonking effort to make it into Super Pole in only his second FE race, qualifying second - after Evans' time deletion - despite messing up his preparation at the end of the warm-up lap.

Race 1 winner Sam Bird originally qualified in fourth place, but will be forced to start from 13th on the grid thanks to a 10-place penalty picked up for “dangerous driving” in Race 1 yesterday.

Bird’s grid drop will promote Audi’s Daniel Abt - who bent his steering wheel with a minor contact with the barriers - to third, two spots ahead of the second DS Virgin car of Alex Lynn.

Antonio Felix da Costa will start from sixth on the grid, while yesterday’s pole-sitter Jean-Eric Vergne will have to settle for seventh.

NIO drivers Oliver Turvey and Luca Filippi will occupy eighth and ninth spots on the grid, just ahead of Nick Heidfeld.

Lucas di Grassi failed to progress to Super Pole for the second race in a row, the defending champion qualifying a lowly 12th with a time that was seven tenths slower than group stage pacesetter Evans.

Di Grassi’s long-time rival Sebastien Buemi ruined his own qualifying lap when he brushed the barriers in sector 2, damaging his Renault in the process.

He props up the timesheets in 20th, right behind the Dragon pairing of Jerome D’Ambrosio and Neel Jani.