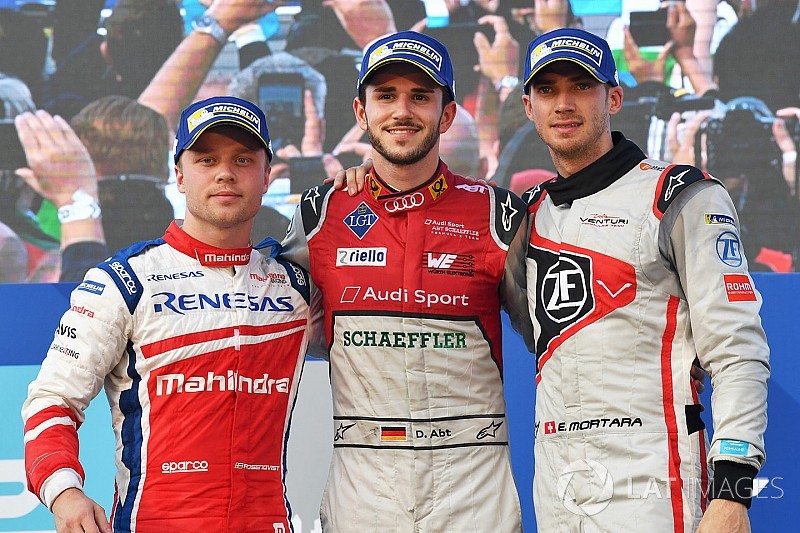 Daniel Abt was handed his and Audi’s first factory victory in Formula E after long-time leader Edoardo Mortara spun from the lead of the second Hong Kong race.

Mortara was easing to a commanding win when he lost the rear at Turn 2 on lap 43 of 45 and dropped to third, gifting Abt the win and promoting Felix Rosenqvist to second.

The race started under the safety car after a lights failure, and Mortara inherited the lead almost immediately when poleman Rosenqvist locked the rears and spun at the Turn 1 hairpin.

He dropped to 11th and as he started a gradual fightback, Mortara gradually edged away from Abt and established a decent lead in his Venturi.

Mortara’s energy management was superior to his pursuer’s and he was more than three seconds clear after the mid-race car swaps, before Abt briefly cut that gap to less than two seconds.

With more energy, Mortara responded with a sequence of personal bests and his lead had ballooned to more than three seconds again when he suddenly lost the rear.

He blamed a problem with the energy harvesting system initially, but later said it was a result of him pushing for fastest lap.

“I am gutted,” he said. “I was struggling with the brakes at the end. It was my fault.”

Abt, celebrating his 25th birthday on race day, gleefully swept past and made no mistake as he secured his first win in FE – and first victory anywhere since the 2012 GP3 season – and give Audi a triumph in its first weekend as a full works team in FE.

Rosenqvist had a stunning recovery drive after his first-corner blunder, gradually rising through the order with a blend of aggressive overtaking and strong pace .

Mitch Evans looked like he might give Jaguar its first podium in FE after running third in the opening stint, but he then had a problem swapping cars and had to settle for fourth.

Alex Lynn was set to finish fifth for DS Virgin Racing but plummeted to 10th on the final lap as he ran out of energy, promoting Jean-Eric Vergne, Saturday winner Sam Bird, Oliver Turvey, Maro Engel and Nico Prost.

FE rookie Andre Lotterer ended a trying first weekend in the series with a heavy shunt at the final corner of the race – he speared into the barriers on the exit in bizarre fashion.

Abt’s win launched him to the top of the points after the opening weekend’s double-header, with Bird second after recovering from a 10-place grid penalty, but reigning champion Lucas di Grassi and 2015/16 title winner Sebastien Buemi still have zero points to their names.

Di Grassi suffered an on-track stoppage after the car swaps, but was running outside the points anyway, while Buemi made reasonable progress from starting last after his qualifying error but only made it back to 11th.