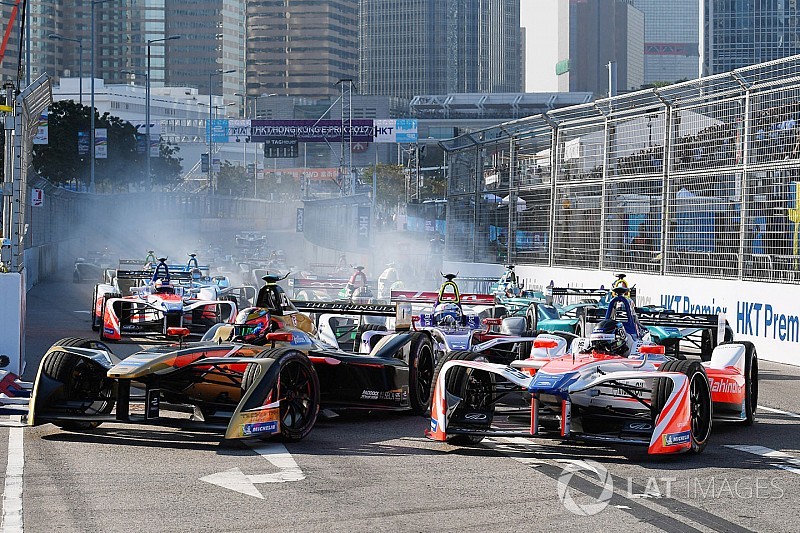 Nick Heidfeld has hit out at Jean-Eric Vergne after their on-track battle in the Formula E season-opening Hong Kong ePrix, describing the Frenchman’s defence as “slalom” racing.

Heidfeld jumped from fifth to third in the pitstop sequence and was immediately on the back of Vergne, who was comparatively short on energy after having stopped a lap earlier.

The German made several attempts to pass Vergne and had his nose firmly ahead while braking for the chicane, only for the Techeetah driver to block him on the exit, resulting in contact.

The move attracted criticism from Heidfeld, who felt Vergne “did not stick to the rules” while defending his position.

“It’s probably one of the third places I’m the least happy about," he said. "I’m sure that will change hopefully in the next couple of days, which shows teams has done a good job.

“Finishing on the podium is always a good result. I’m just disappointed because he had quite a lot of problems and didn't have the pace because of the issues on his car.

“I tried to hard to overtake him, but I wasn't always happy with what he did. To me he was doing a bit too much of a slalom race. I think he did not stick to the rules.

“We spoke about that, he obviously seems to think it was okay. I accept that. But I'm not that happy.”

Vergne felt he nothing wrong while defending against Heidfeld, saying he wouldn't do anything "silly" to jeopardise his title chances.

“I just wanted to end that race,” he said. “It was really tough. Nick is a good fighter.

“I’m here for the long term, thinking about the championships. So I wasn’t going to do anything silly.

“Sometimes you have to finish second and third or fourth, but take the points. And at the end of the year they will count.”

Vergne was hit by a spate of issues, including those related to battery regen, brakes and radio communication, all of which dropped him into the clutches of the Mahindra driver.

“I have to thank the team because this race was probably by far the most difficult race," the French driver added.

"No radio communication. You need information but I didn’t have the right line on my dash. My brakes were not working, and I had no regen.

“To have these issues and finishing second, it’s more than a win to us. That means when we will fix them - and I’m sure we are going to fix them in the night - tomorrow we should be stronger.”