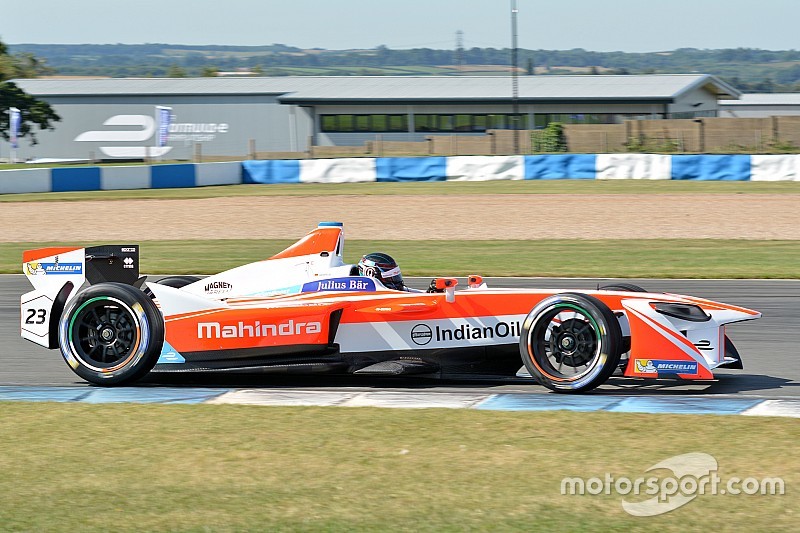 Asked about how the new M3Electro compared to its predecessor, Heidfeld told Motorsport.com: “[It’s] a big step, [but] actually driving the car, there’s not a massive difference.

“It is clearly better, but if I just look at the packaging, if I look at the weight, the design of everything, this looks like night and day compared to last year."

Nonetheless, Heidfeld was keen to downplay the significance of Mahindra's testing showing, owing to the very different nature of the Donington circuit compared to the series' usual street venues.

"The [first] Donington test has gone quite well," said the German. “I saw it after our private testing, that the team did a very good job in achieving what they planned.

"But the question always is what the competition will do. It looks quite good, but we have to remind that it is only testing and we don’t know what others are doing or if they are pushing flat out.

“It is not easy [at Donington] because you can be misled by some of the results. You have to keep in mind to focus on the right corners, rather than the quick corners where there is laptime to find but are pointless for the rest of the year."

Pushed for his targets for the coming season, Heidfeld said improving on fifth in the teams' classification and taking regular top-three finishes was an achievable goal.

"It would be great [to fight for the title], but that would be a huge step from last year, and there are no miracles in motorsport," he said.

"Our target is to improve from last season, score more podiums and hopefully fight for some wins."

“We believe we can win a championship with Felix in the future, absolutely,” Gill told Motorsport.com.

“The attraction of having Felix and the reason we signed him is that he is a proven winner and champion in single-seater racing.

"For his age he has a lot of experience but also brings intelligence and some big ambition. He was the perfect fit in many ways for Mahindra, because we share the same values of aiming to win in the future."

Mahindra had zeroed on Rosenqvist last season to replace Heidfeld when the German injured his wrist, but eventually settled for 2015 Formula Renault 3.5 champion Oliver Rowland.

“For a driver of Felix’s calibre and with the seat time he will have had before the first race we expect him to really push Nick from the start," continued Gill.

“He has shown he can integrate in to the team very quickly. What we also know is that he is special on street circuits.

"His record at Macau shows that and the range of cars he has driven shows he can adapt immediately. He will be a really strong addition to the championship.”

Evans to partner Carroll at Jaguar