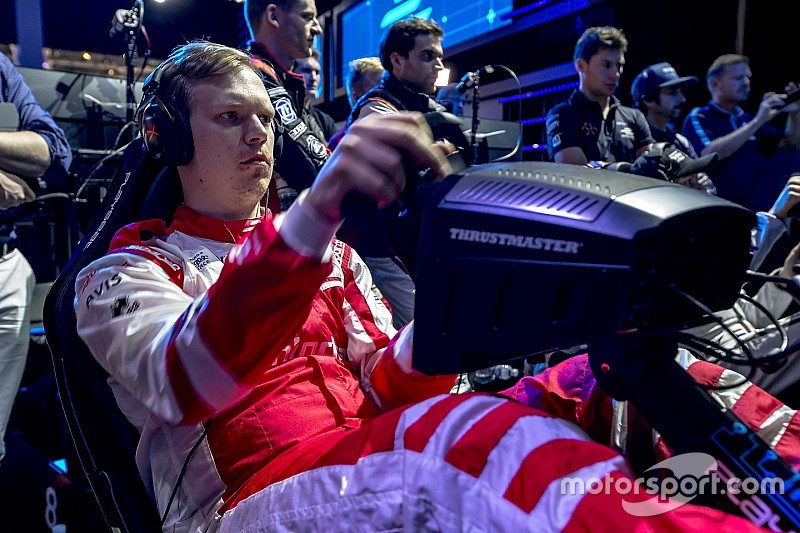 After the race, however, there was an investigation over whether Pahkala had been able to use his Fanboost for longer than was allowed.

The Finn had executed an alternative strategy in the Vegas shootout to leapfrog long-time leaders Bono Huis and professional driver Felix Rosenqvist.

Pahkala, driving for the Mahindra team, ran sixth in the early stages of the 20-lap race as Faraday Future Dragon Racing’s Huis built a small lead from pole position.

Rosenqvist was comfortably the best-performing racing driver in the field and rebuffed a brief attack from Andretti’s Aleksi Uusi-Jaakkola to maintain second as a multi-car scrap for third developed behind.

Uusi-Jaakola headed a train comprising DS Virgin Racing’s Graham Carroll, Renault e.dams’ David Greco, Pahkala and Enzo Bonito, with Pahkala opting out of that scrap in the first half of the race when he became the first of the leading group to stop.

Three drivers were then eliminated from the podium fight at the halfway point.

Carroll finally got a run on Uusi-Jaakola exiting the final corner and moved to the inside of the Finn into Turn 1, as Greco made it three-abreast on the outside.

Uusi-Jaakola and Greco touched, with the former then hitting Carroll’s left-rear wheel and sending all three crashing dramatically.

As the race progressed, Huis made a mistake at the front that allowed Rosenqvist to close to within two seconds.

The Dutchman and the Swede then pitted as one with five laps to go, but the delay, combined with Pahkala’s searing Fanboost-aided pace (which netted him $10,000 for fastest lap), meant their lead battle became a fight for second when they emerged.

As Pahkala coasted to victory in front, a visibly frustrated Huis was able to keep Rosenqvist at bay for second and $100,000 (in addition to the $25,000 he earned for pole), with Mahindra’s professional driver banking $50,000 for the final step on the podium.

Through the chaos, Bonito finished fourth for Techeetah ahead of the recovering Uusi-Jaakola and Jaguar’s Greger Huttu.

The inaugural running of the eSports event was not without its problems.

Technical glitches led to delays and a reduction in the race length to 20 laps, while Lucas di Grassi was unable to take the start after an issue with his simulator.