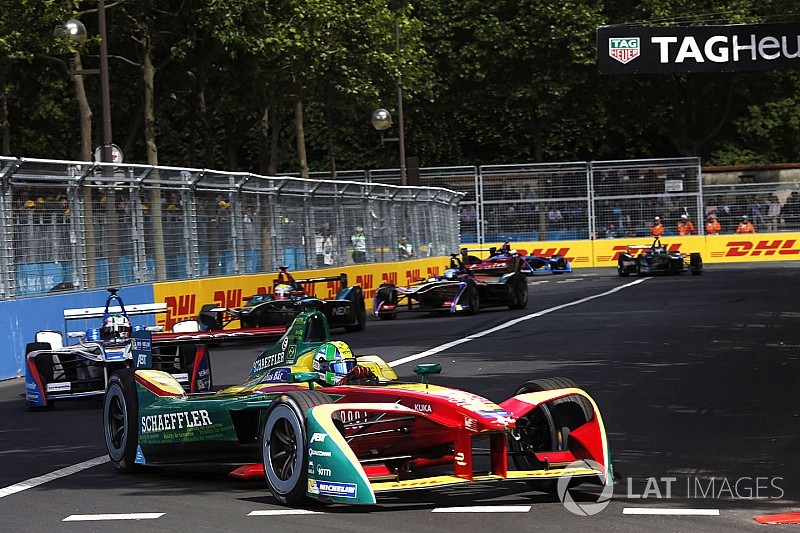 Formula E cars could feature brake-by-wire systems as early as the 2018/19 season.

The current generation of the electric single-seater harvests energy under braking from the rear axle via its electric motor, but this is a basic system with predetermined values rather than one that tailors the amount of energy being regenerated.

Introducing a brake-by-wire system would allow greater electronic control of the rear brakes that improves the feel for the drivers and maximises regen.

Teams view such an ‘active braking’ system as one of the key technologies needed in the series, especially with qualifying power increasing from 200kW to 250kW and race power rising from 170kW to 200kW in 2018/19.

DS Performance technical manager Xavier Mestelan-Pinon described brake-by-wire as “the big new thing” for Formula E, while Faraday Future Dragon Racing technical manager Nicolas Maduit said he was sure “there will be some active braking system” for 2018/19.

“It could be close to what we see in the World Endurance Championship,” Maduit added.

German braking specialist LSP has already built an active braking system, known as IBSe, which can control brake pressure by axle or on each wheel.

Professor Burkhard Goschel, president of the FIA’s Electric and New Energies Championships Commission, said a brake-by-wire system was achievable but a final decision is yet to be taken.

“We can do it, yes,” he said. “It is under investigation at the moment on how we go into this.”

Goschel said the FIA had “ideas” on how to improve efficiency and “make the series more dynamic”.

He added: “This could include a front axle in the future so it gives totally different energy management.”

Harvesting energy from the front-axle and introducing torque vectoring – the process of having one motor power each wheel, and being able to manipulate how much power is delivered to each wheel at any time – are among Formula E’s most divisive talking points.

“I think the regulations and roadmap needs to move on but it needs to be careful on costs also.

“We need to see what is happening in the car industry. Electric technology is moving fast and we need to match it and stay relevant.”

Formula E frontrunner Lucas di Grassi added: “I would also use an electronic differential on the back and one motor for each wheel to control the acceleration, because this makes much more sense for an electric vehicle.

“We will see what the future holds but we need to try and look at a closer timeframe for these to come in.”

Goschel said torque vectoring would “make life easier for the driver” and as it could constitute a driver aid would require serious discussion.

“If a car is going like it is on rails, it is not so exciting,” he said. “So we should take care of this point.”

D'Ambrosio to stay at Dragon for fourth season