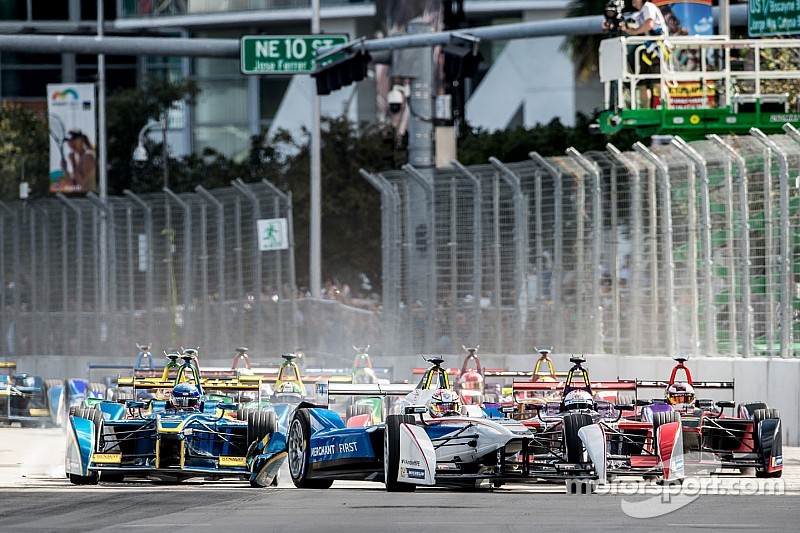 The Long Beach street circuit - almost completed in its entirety - will look a bit different this weekend as FIA Formula E takes over The Beach. While certain areas of the circuit remain intact, it’s been shortened to allow the ePrix to do 39 laps over a 1.324-mile length of seaside track. The traditional Toyota Grand Prix of Long Beach circuit is 1.968 miles.

Gone is the famed fountain turn by the Aquarium of the Pacific; the cars will turn right from the front straight, itself bisected by a chicane near Shoreline Village, at Pine Avenue and race to Seaside Way before turning right and continuing to the tradition right turn that leads to the horseshoe and eventually the hairpin that are focal points of every other Long Beach race contest (including Formula Drift, which races here next weekend).

Although action will not commence until late Friday afternoon with a half-hour “shakedown” behind the safety car, course buildup and has been in progress for a few days. Road cars are still able to travel on Shoreline Drive through Friday morning’s commute and will be on-course following the shakedown exercise this afternoon.

FIA Formula E is unusual in that the cars are impounded directly after each race and the mechanics, team members have zero access to them until both the teams and the cars arrive at each of the 11 venues - Long Beach is Round 6. Teams began to work on their vehicles and prepare them for action Thursday afternoon. Many worked late into the evening and arrived early in the morning to prepare the cars for battle.

As with any race car, there’s much to be done following the Miami event and to get ready for the very different physical aspects of Long Beach. While both are seaside venues, they are quite diverse and this weekend’s circuit is much smoother and is also already prepped - as noted above - for racing.

FIA Formula E CEO Alejandro Agag participated in the media/pro karting event on Thursday afternoon, enjoying the camaraderie with some of the 20 drivers on-site for the contest. As expected, there was plenty of bouncing and bumping and fun had by all prior to the commencement of real racing.

Agag, addressing the media on Friday afternoon noted that the series is pleased to have two races in the United States because of the emphasis on technology. “We have to find a way to store more and more and more energy in a smaller package,” he noted. As this is the first year of Formula E, it’s still a requirement to change cars midway through each contest as the battery technology works to catch up to the racing inherent in these competitions.

“There is a great tradition and heritage [inherent] with racing in Long Beach,” Agag acknowledged. He spoke of the fact that Nelson Piquet Jr’s father won this race in Formula 1 and Piquet Jr now has the opportunity to secure victory on these same city streets. Formula E, of course, has been built from scratch, from the cars to the technology and has been four years in the making.

A change in the car swap

There will be a difference in this race at Long Beach from those that have come before. For the first time, and Agag is quite excited about this, drivers will change cars on pit road, rather than in their garages. The public will be able to witness this part of the competition, the dance from one vehicle to the other that is integral to this competition.

At Long Beach the minimum time from pit entry to pit exit is 77 seconds, and that includes the pit stop itself. It will be interesting to see who negotiates it best on Saturday afternoon.

As Miami ePrix winner Nicolas Prost pointed out, with no changes to the cars allowed this year and with the caliber of drivers in the series, this is the one place you can actually see drivers at their best. The equipment is the same from one of these 10 teams to the next but the abilities of each driver can make a big difference in such a short race.