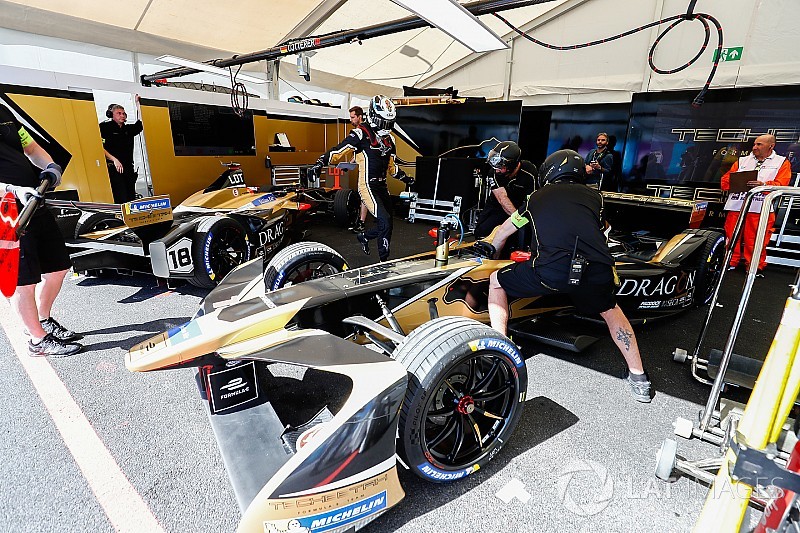 The FIA has installed in-garage cameras to monitor Formula E car swaps after the controversy that has followed its decision to remove the series’ minimum pitstop time.

The governing body clarified what was permitted during the car swap procedure at the Punta del Este round last month following a request from the teams.

Drivers must be properly restrained by their belts at all times when the car is moving and it is not permitted to remove the steering wheel before stopping. Teams are also not permitted to buckle any belts before a driver is seated, which is also only the point at which the Belt Tension Device – mounted on the drivers’ shoulders – can be activated.

Each team has been given two cameras, which must be installed above the two drivers’ designated second cars. The cameras must be positioned to give an unobstructed view of the whole car swap procedure.

The teams are responsible for operating the cameras – with footage being broadcast in race control, which can be analysed after a race.

If more information about an incident comes to light between events, FE stewards at the following meeting now have the power to assess that evidence as well as that gathered by officials at the previous round, and hand out punishments if an infraction is discovered.

The car swap procedures were previously solely monitored by in-garage scrutineers, who will continue to view events in the garages.

The minimum pitstops time was removed ahead of the Santiago round of the 2017/18 season. At that race, the Techeetah and Dragon teams were fined for adding a modification to their safety harnesses, while at the next round in Mexico, Techeetah’s Andre Lotterer clipped a mechanic as he accelerated out of his garage.

When asked by Motorsport.com why the FIA was staying firm on having no minimum pitstop time, the governing body’s President Jean Jodt reiterated its stance that pitstop safety was the responsibility of the teams and drivers.

“It’s something we have been working since two years [ago],” he said. “We felt that with such a competitive category of motorsport that we also wanted to allow the best to make the difference.

“Clearly, all has been done over two years of research to be able to make safe pitstops. And that’s what we feel happened.

“Now it’s the responsibility of the teams to respect the regulations. Sometimes the teams wish to be more competitive than the others [and] they are prepared to take some risks and we won’t allow that.

“If you want to try and save time and to be unbuckled before you stop, [or] to buckle after you have started – you will be reported to the stewards to make some strong decisions. But if you follow the rules and the procedure, I feel that there is no problem of safety.

“I hope that every driver and every team will be responsible and we shouldn’t have any problems.

Take a virtual lap of the Rome E-Prix circuit...