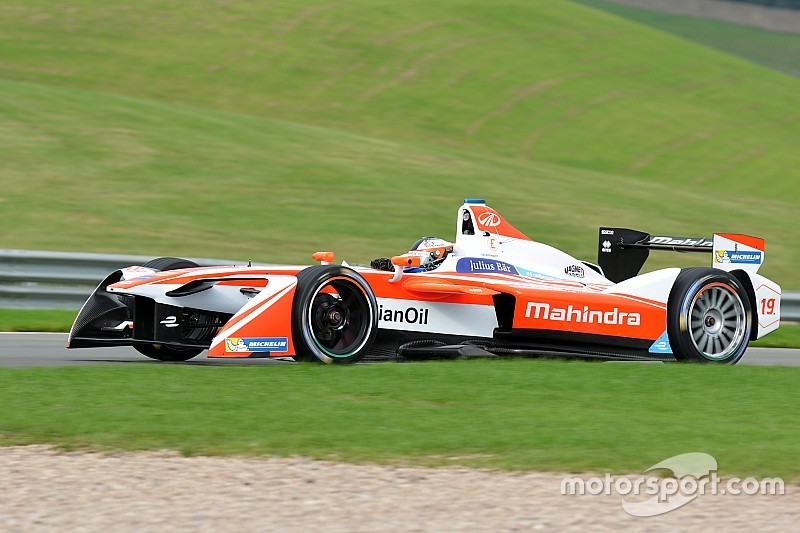 Rosenqvist enters an arena where pioneering technology converges with motorsport

This weekend sees Felix Rosenqvist set his eyes literally on the future, as the innovative FIA Formula E Championship kicks off in the heart of central Hong Kong. As the first Swedish driver ever to join the all-electric single-seater series, Rosenqvist enters an arena where pioneering technology converges with motorsport, and where some of the fastest drivers on the globe go head to head in 12 races staged across five continents.

The FIA Formula E Championship is the world's first fully-electric racing series. As the 2016-17 season gets underway this weekend, 2015 FIA Formula 3 European champion Rosenqvist will become the first Swede in history to grace the grid, teaming up with Mahindra Racing to form part of a field featuring 20 drivers and stiff competition from manufacturers such as Renault, BMW, Citroën/DS, Audi and Jaguar.

"This is going to be the most unique challenge of my career to date," says Felix Rosenqvist. "It will be a lot of fun, and highly exciting. I basically don't know what to expect; I don't know how competitive I'll be, or how to best go about Formula E racing. We have made a lot of simulations in pre-season testing, but this is when it gets serious. Electric racing is very different to anything I've done before, and it'll be great to finally get going."

Unlike a traditional racing season, the Formula E campaign stretches across two calendar years, with this week's curtain-raiser in Hong Kong marking the first of ten rounds (12 races) on the 2016-17 agenda which concludes in Montreal on July 29-30, 2017.

Qualifying on Sunday will be the first real indication as to where we stand.

All Formula E races are staged inside some of the world's most iconic cities. After the Hong Kong opener, the season rages on in Marrakech, Buenos Aires, Mexico City, Monaco, Paris, Berlin, Brussels, New York and Montreal.

"The Formula E calendar is one of a kind," Rosenqvist continues. "It's all about city-centre events on tight and twisty tracks, which I find particularly thrilling. As a matter of fact, I've won at every street circuit I ever drove, although unfortunately I do expect that run to be interrupted now! We race in some very exotic locations and that alone will be a memory for life."

Hong Kong hosts a Formula E event for the first time this weekend, making the 1.8 km Central Harbourfront track - laid out beneath the skyscrapers just next to the legendary Star Ferry terminal - a new acquaintance for the entire field. Rosenqvist arrives in the Asian metropolis fresh from winning Sunday's Blancpain GT Series Sprint Cup finale in Barcelona.

"The tracks used in Formula E are all temporary set-ups on normal roads, so it's not possible to go there and test during the rest of the year," Rosenqvist explains. "The only thing you can do to prepare is really just studying the layout, which I've obviously done. Hong Kong appears to have an interesting mix of fast and slow corners, and a pretty long straight of about 500 meters, so I think it will lend itself to some great racing. I hear it might be wet, as well."

Teaming up with Rosenqvist at Mahindra Racing is Germany's Nick Heidfeld, who has been part of the Formula E field since the series' inception in 2014. Among other rivals on the grid are both previous Formula E champions, Brazil's Nelson Piquet Jr. (who won the inaugural title in 2014-15) and Switzerland's Sébastien Buemi, as well as three-time WTCC champion José María López (Argentina) and France's Nicolas Prost, the son of four-time Formula 1 world champion Alain Prost.

In preparation for the season ahead, Rosenqvist and his fellow rivals conducted six days of official testing at Donington Park (UK) back in August and September, working through important performance and reliability programmes. Mahindra Racing used the tests to tune-in the all new Mahindra M3Electro – the car that will carry the team's hopes in 2016-17 – with Rosenqvist and Heidfeld completing a total of 4,100 km of running (including private outings).

"Testing was largely positive and we were able to gather a lot of information," Rosenqvist concludes. "We have a brand new powertrain for this season, developed in conjunction with our partner Magneti Marelli, so we were working mainly on reliability. We did set some fast times at Donington, but that's a very different track to what we'll encounter during the season and I really wouldn't read too much into it. Qualifying on Sunday will be the first real indication as to where we stand. I'm cautiously optimistic, and I realize it will take a few races to fully learn the technology and strategies of Formula E."

All Formula E events - barring the New York and Montreal double-headers next summer - are one-day meetings, meaning all running is packaged in a compact and fan-friendly event programme.

Felix Rosenqvist carries the #19 during the 2016-17 FIA Formula E Championship.