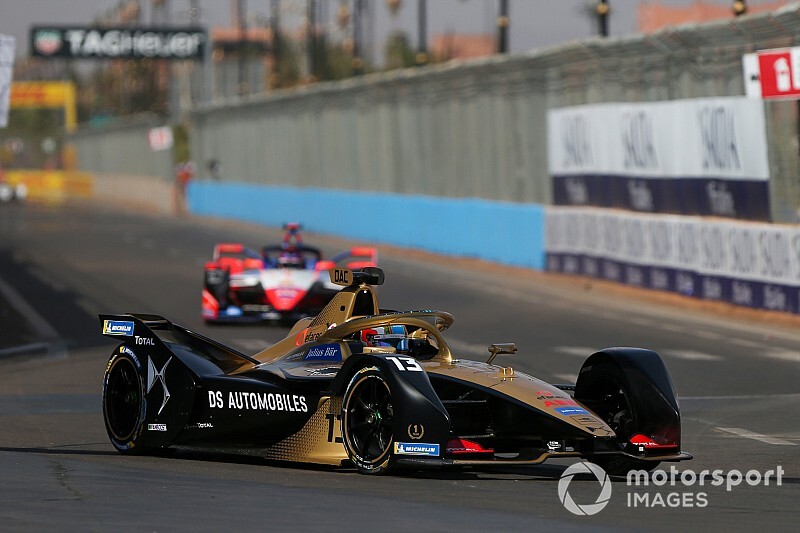 This season the Moroccan round adjusted its format to hold first practice on the Friday evening as opposed to the usual one-day FE timetable.

The change to the structure for the 2019-20 season follows the decision to bring forward the race start by an hour, which would have led to a morning first practice session running in low-light conditions.

With the changes to the schedule, Vergne was unable to contest the 45-minute run, having been sidelined with severe headaches.

In a tweet that has since been deleted, the DS Techeetah driver wrote that he was working with FIA medical staff to return for Saturday. He was replaced for FP1 by the team’s test driver James Rossiter.

A regular at the races this season, the ex-Nissan Super GT driver ended the session 20th and 1.95s off his temporary teammate da Costa.

Sam Bird was sixth-fastest for Envision Virgin Racing – posting a time 0.555s shy of da Costa – and enters the race with a 100% podium record in Marrakech.

Rowland's squadmate Sebastien Buemi, who scored his first points finish of the season with third in Mexico City last time out, was seventh ahead of Daniel Abt and Jerome D’Ambrosio.

Mexico pole-sitter Andre Lotterer was only 12th fastest ahead of Eduardo Mortara and Alexander Sims.

Although the session ran with no interruption – other than the scheduled full-course yellow test run – Sims did bring out a yellow flag when he ran deep into Turn 7 and was forced to reverse on the escape road.

Mercedes driver Stoffel Vandoorne was only 23rd-fastest, having had a lap time deleted for missing the Turn 5/6 chicane.

He was still 2.127s ahead of slowest driver Ma Qinghua, driving for the NIO 333 team – which enters this weekend with a new team principal and executive director.