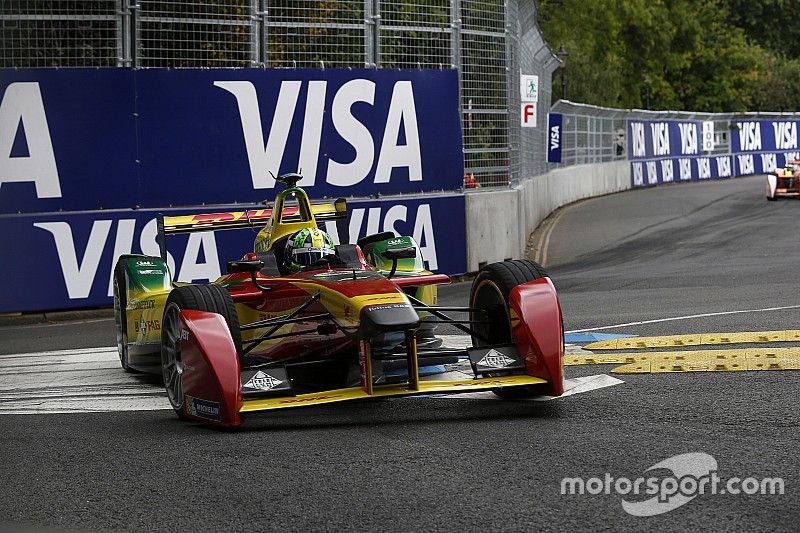 The final race day in the inaugural season ran strangely due whether conditions.

The fans in London and in front of their televisions were privy to a dramatic heart-stopping finale for the first Formula E championship title and a Lucas di Grassi with enormous fighting spirit. Nevertheless, at the finish the Brazilian from team ABT had to settle for third place overall after the eleventh and final race. Champion is Nelson Piquet Jr.

The final race day in the inaugural season ran strangely: a qualifying session was held in changing weather conditions for the first time ever in the history of the electric race series. Out of luck: Lucas di Grassi took to the track in the last of four groups, and this in pouring rain. Although the Brazilian recorded the fastest time on the wet track, he only started the race from eleventh on the grid. Team mate Daniel Abt also caught the wet phase and started from 18th position.

In the 29 lap race through Battersea Park, di Grassi tried everything to close the gap to Sébastien Buemi and Nelson Piquet, took six points from the future Champion with sixth place too little for the storybook ending. “We gave our all and fought for the title to the last corner… we committed ourselves as team to this. Although we didn’t win the championship, we can still travel home with our heads held high, and are proud that we raced for the title in the first Formula E season,” says di Grassi, who won the season opener in Peking and celebrated another five times on the podium. The motivation is intact. Lucas di Grassi: “Our preparations for the new season begin tomorrow.” Daniel Abt only just missed scoring more points after finishing eleventh in the season finale.

After the Formula E world tour, which led from Asia via South and North America to Europe, Lucas di Grassi claimed third place in the overall standings. Daniel Abt finished the season in eleventh place. ABT Sportsline finished third in the teams classification.

“Before the weekend started, we promised our fans that we would fight down to the wire for the Formula E title… we did this with great passion. Now we congratulate Nelson (Piquet) for winning the championship and Alain Prost’s team for winning the team classification. Whoever is at the top after a long season is without doubt a worthy Champion,” says Team Boss Hans-Jürgen Abt.

“My thanks today also go to our mechanics, engineers and of course Daniel (Abt) and Lucas (di Grassi). We maintained our focus and kept cool despite several setbacks and always came back fighting. In my eyes, Lucas, who lost two certain victories through no fault of his own, due to a technical defect and a disqualification, is also a Champion without a title.”

“However, the team from Kempten has no time to take a breather: the next generation Formula E had its first run two and a half weeks ago. We are proud to be a part of the Formula E family from the very beginning,” says Hans-Jürgen Abt. ”We now make the next step in the role of manufacturer and the development of our own racecar. We have a huge amount of work looming up in the coming weeks and months, before the second season starts in October. We already looking forward to taking revenge!”