F3.5 champion Dillmann to test for Venturi in Mexico 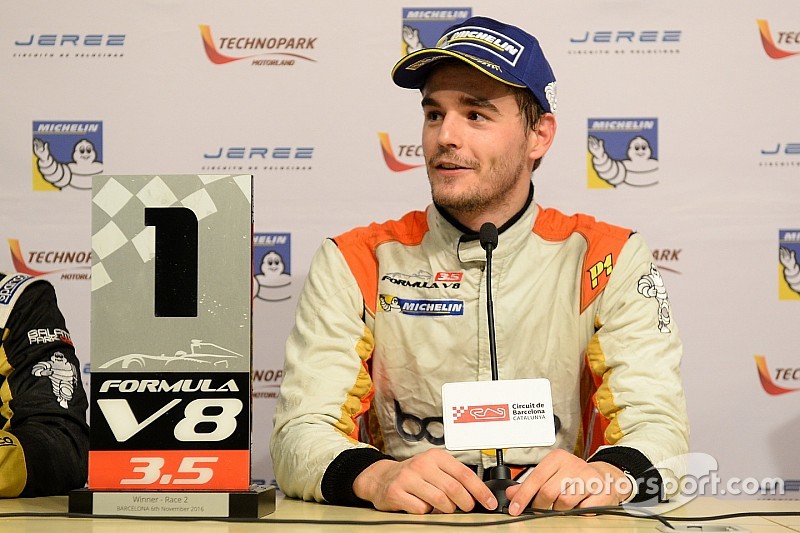 The Frenchman will test Stephane Sarrazin’s two Venturi VM200-FE-02 cars, as the experienced French driver will be commuting to Mexico on Friday after he attends the Toyota WEC launch in Monza.

Dillmann will also act as cover should Sarrazin suffer any travel delays on his way to the Hermanos Rodriguez circuit.

“It's a good opportunity,” Dillmann told Motorsport.com. “The aim is to race full-time for the next season, so it's interesting for me to be in this role with Venturi.”

“Formula E is a championship of the future, attracting more and more constructors, and racing there would be a good option.

“I'm still a young driver, albeit very experienced in single-seaters since I started at age 14. I won a title in [German] F3, another in one of F1's feeder series [Formula V8 3.5], I raced in endurance too - I think I can still do good things.”

Dillmann has some experience of Formula E machinery after driving for Team Aguri at a Donington Park test in August 2015.

Motorsport.com understands that the 27-year-old is currently unlikely to make his race debut in Paris in May when regular driver Maro Engel misses the event due to Mercedes DTM commitments at the Lausitzring the same weekend.

Venturi was close to finalising another driver for the Paris race before confirming the news that Dillmann will run in Mexico.

No replacement for Buemi in shakedown

Meanwhile, Nicolas Prost will undertake shakedown solo for Renault e.dams, driving all four its of its Z.E.16s. with Sebastien Buemi flying in overnight from Toyota’s LMP1 launch with Sarrazin.

Renault had hoped to draft in Oliver Rowland to split Friday duties, but the Briton is instead in Bahrain for F2 testing with DAMS.

Alex Lynn will deputise for another Toyota WEC driver, Jose Maria Lopez, at DS Virgin Racing in shakedown, which will mark the Briton's first official running in a Formula E race weekend.