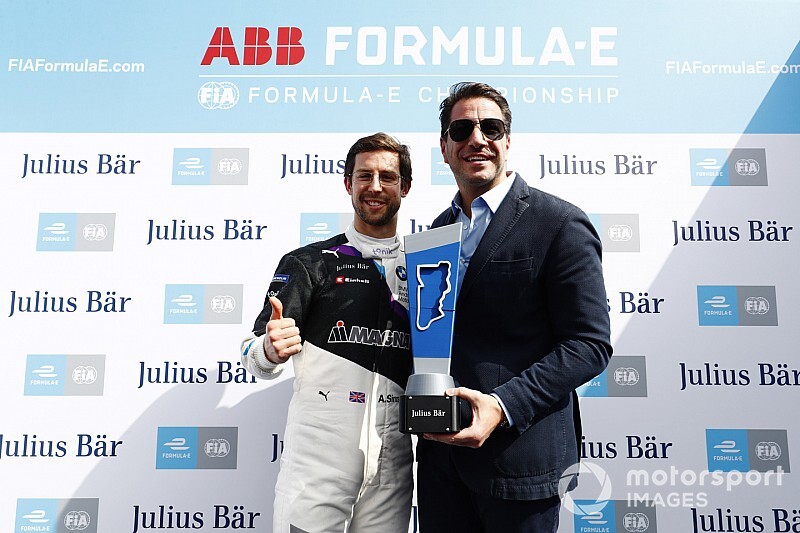 Alexander Sims completed a clean sweep of Formula E pole positions at the Diriyah E-Prix, withstanding a late onslaught as Antonio Felix da Costa made errors on his superpole lap.

The BMW driver held an advantage of 0.4s over Lucas di Grassi in the opening two sectors, before a slide on the exit of Turn 16 burdened Sims with a little bit of a disadvantage in the final sector - although he rocketed to the top of the timesheets regardless.

Sims’s time then absorbed a siege from the remaining runners, as Sebastien Buemi couldn’t quite overcome the British driver’s time, while DS Techeetah’s da Costa suffered two hefty slides during the second sector, tapping the wall on the exit of Turn 16 to all but end his chances of pole.

Da Costa had set the fastest lap in the first part of qualifying, progressing from the third group and claiming his first point of the 2019-20 season.

Making an appearance in the second qualifying group, Sims was narrowly beaten in the first part of qualifying by Jerome d’Ambrosio, but both drivers - along with Mitch Evans - made it through to superpole.

Audi driver Di Grassi also progressed from the third group, while Buemi was the sole representative of the final group.

Buemi’s time in superpole was good enough for second, beating di Grassi and Evans to a front-row start in the race, while da Costa qualified behind d’Ambrosio after the slides on his final lap.

Race one winner Sam Bird converted a group one qualifying session effort into seventh, suggesting a subdued rate of track evolution compared to the session on the previous day.

Edoardo Mortara was the highest-placed Mercedes powertrain runner after qualifying ninth, unable to reprise his Friday role in the superpole shootout.

After hitting the wall in practice, 2018-19 Formula E champion Jean-Eric Vergne qualified 11th, having been offered a consolation berth in the fourth group following his steering rack-enforced retirement from the first race.

Nissan e.dams driver Oliver Rowland struggled in the first qualifying group, clocking in a lap over a second slower than his best effort in practice.

James Calado managed to make it out to qualifying after his Jaguar team repaired a driveshaft at the rear of his car following a practice error, just managing to stay off of the final row of the grid.

Nyck de Vries qualified last after losing over two seconds in the final two sectors, ending his session 21 places below his top-three qualifying position on Friday.