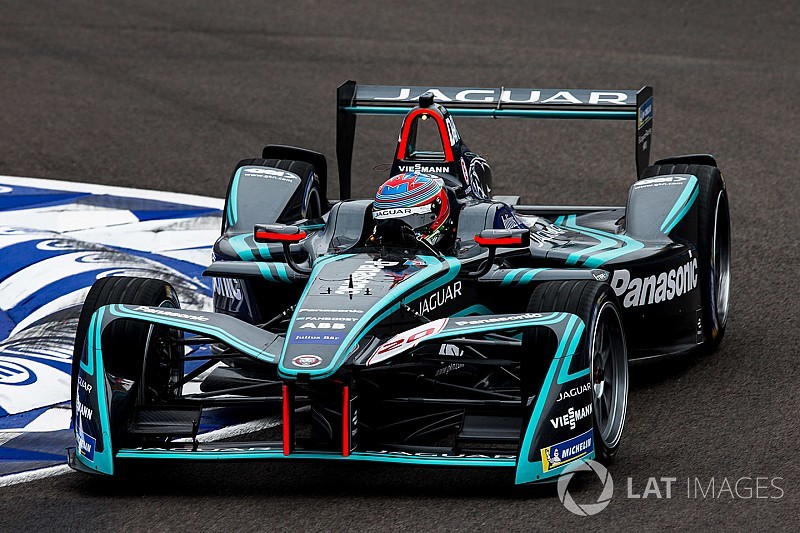 Jaguar driver Paul di Resta topped the morning session of Formula E’s rookie test in Marrakesh, which was briefly interrupted by a dog running onto the circuit.

Maximilian Gunther settled at the top of the times after the first of three hours of morning running in Morocco, where the test is being held exclusively for drivers who have not held a Formula E race licence.

Gunther, driving for Dragon Racing, clocked a 1m22.599s to narrowly head di Resta and DS Virgin Racing’s Joel Eriksson by half a tenth.

Eriksson then found a tenth to leapfrog his 2017 European Formula 3 Championship rival, before the first of two stoppages.

Gunther’s Dragon teammate Andrea Caldarelli was the culprit; the Italian crashed at the start of the lap, causing heavy damage to the front end.

He did not emerge again in the morning.

BMW DTM driver Bruno Spengler looked set to challenge his new-for-2018 teammate Eriksson for top spot, but the Canadian – driving for Andretti in this test – slowed dramatically in the middle sector with an unknown problem.

After Spengler’s issue there was a second red flag, although this was much briefer than the one caused by Caldarelli.

A dog ran onto the circuit but proved easier to clear than a crunched Penske EV-2, and running resumed almost immediately.

Di Resta moved to the top of the times on a 1m22.343s, with Techeetah’s James Rossiter lapping just 0.090s slower.

Light drizzle then started to fall, rendering the rest of the morning useless in terms of improvements.
Nobody else leapfrogged the F3 graduates, which meant Ferrari Formula 1 protege Antonio Giovinazzi ended up fifth, two places and two tenths behind Eriksson in the other DS Virgin.

Daniel Juncadella, who set the pace early on, was eighth for Mahindra, with Spengler and the second Renault of Mitsunori Takaboshi, Nissan’s Japanese Formula 3 champion, completing the top 10.

Formula 2 race winner Nyck de Vries was the only one of the 20 drivers not to set a time. The McLaren junior was kept in the garage by “technical issues” on his Audi Sport Abt e-tron FE04.