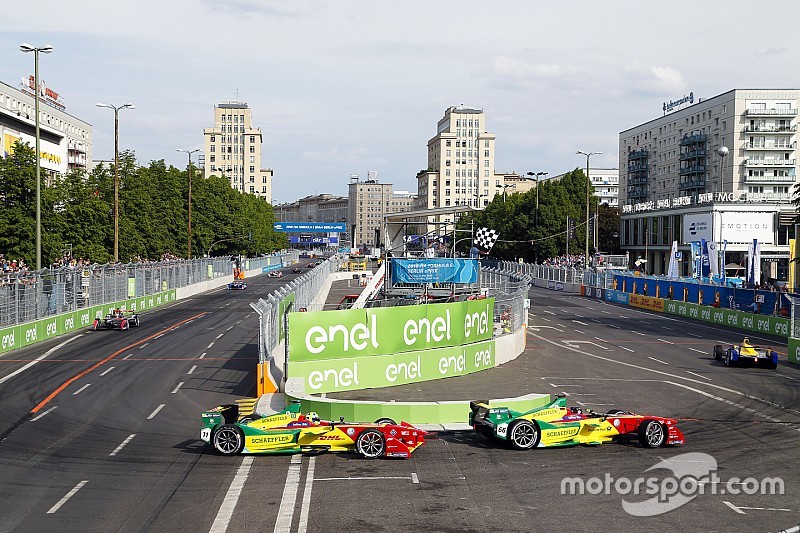 Lucas di Grassi says that the possibility of swapping places with Formula E teammate Daniel Abt had not been discussed ahead of last weekend's Berlin ePrix.

The Abt Schaeffler Audi Sport team made the call for second-placed Abt to move aside for di Grassi with two laps of the race remaining, after a lengthy safety car period had bunched the field up.

The German driver made an initial signal to the Brazilian to pass on the penultimate lap, and then judged it to be too risky on the final tour to let his teammate through.

“Nobody talked to me [about team orders] during the race," di Grassi told Motorsport.com after the race.

“The only thing we agreed between each other is not to fight as hard as we do with other drivers, because we are teammates.

"It was never discussed to give a position back, especially under these circumstances. Daniel deserved his second place."

Di Grassi, however, believed that he could have made a decisive move on Abt had the safety car not come out to recover Loic Duval’s stricken Dragon Racing car.

“For me, if I arrived to Daniel without the safety car, I would have had much more energy anyway, then I would have attacked him normally,” he said.

"Both [of the last two] laps were flat out. He didn’t do any mistakes, so even though I could have got three more points for the championship, that is the way racing should be and we should race the same way.

"I really would not have been very happy if Daniel had let me go right at the end," the Brazilian added.

Di Grassi goes into the season-ending double header at Battersea Park just a point clear of Sebastien Buemi at the top of the standings.

Abt, who took the best result of his Formula E career to date with second place, said the team's instruction was unnecessary, as he was already aware of the need to support di Grassi's title bid.

“We are very aware of the [championship] situation and we are a team and we fight for the goal of taking both championships,” Abt told Motorsport.com.

“I’m not in the drivers’ championship title fight, so for me it is clear that it is my duty to help him. But the call was not even needed.

"Before the race we spoke about it, and we said ‘be careful with Lucas if he comes up,' and that was it," he added.

Despite believing the call was not needed, Abt still did try and orchestrate a swapping of the position, but di Grassi was not in the optimum position to complete the manoeuvre.

“For me, I was totally fine to let him through,” commented Abt. “I actually tried to do it but it didn’t work.

"Then on the last lap I was just scared. Can you imagine something going wrong, and one or both of us losing positions on the last lap, here at home?"