Di Grassi celebrates his 7th podium of the season 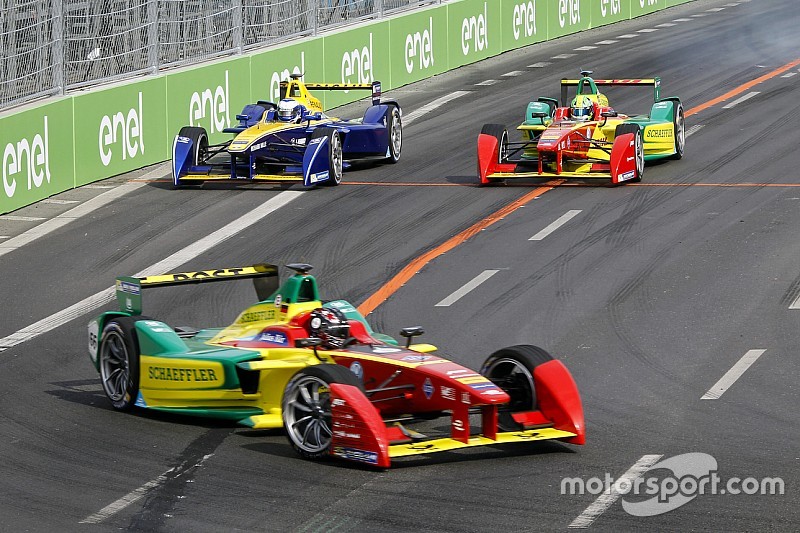 At ABT Schaeffler Audi Sport’s home race in Berlin this Saturday, Lucas di Grassi made an astonishing recovery starting from eight position to be the third to see the chequered flag waved. Renault e.Dams’ Sébastien Buemi won the race, with Di Grassi’s teammate Daniel Abt finishing second.

Lucas di Grassi celebrated with his team mate on the podium: after a poor qualifying and eighth on the grid, the Brazilian upped the tempo once again in the race: di Grassi scythed through the field making great overtaking maneuvers and an equally precise pit stop on the way to third place. It is his seventh podium finish in the eighth race of the season. "First of all congratulations to Daniel, who thoroughly deserved second place after his excellent qualifying and race," said di Grassi. "Today I got the maximum out of my starting position. We can be proud of ourselves once again."

Going into the final two races, Lucas di Grassi now holds a one point lead over Sébastien Buemi from the Renault factory team, who won the race unspectacularly in Berlin. In the teams’ classification ABT Schaeffler Audi Sport sits only eleven points behind the French Equipe. Including the points for pole position and the fastest race lap, 60 points are still up for grabs in London on July 2-3. Lucas di Grassi: "The biggest winner today is the Formula E fan: they didn’t just enjoy a fantastic event in Berlin, but can now look forward to an unbelievable finale."

The race along the Karl-Marx-Allee and the Strausberger Platz overshadowed by the television tower on the Alexanderplatz was not just a complete success due to the grandstands being sold out and the huge supporting programme. "Compliments and congratulations to Formula E and all the organizers: after the spectacular event in Paris several weeks ago, the race in Berlin proved to be yet another highlight," says Team Director Hans-Jürgen Abt. "We’ll now paint the town red and then put everything that we have into the weekend in London." The two final races will be held at the British Capital on July 2nd and 3rd.

Before that, tough, Di Grassi turns his focus to the Audi Sport Team Joest on his fourth 24 Hours of Le Mans start on June 18th.

Heidfeld close to re-signing with Mahindra