Berlin E-Prix winner Nyck de Vries says his pass over Edoardo Mortara into Turn 1 came as a "surprise", but ensured he could "be in command" of the Formula E race.

Starting from third place, de Vries captured a strong getaway to make his way down the inside of second-placed Robin Frijns but, as polesitter Mortara left the door slightly ajar into the first corner, de Vries took the opportunity to go for the lead.

The opportunism paid off for de Vries, who picked up first early on and allowed him to dictate the pace of the reversed race around the Tempelhof Airport, showing good energy management skills in the process.

After a difficult opening race, where de Vries struggled in comparison to Stoffel Vandoorne and could only manage 10th, the Dutchman was pleased to have the opportunity to enact a recovery.

"Yeah, it caught me a little bit by surprise. I had a good start, a little bit better than Robin. And obviously, wasn't too far from Edo. That kind of opportunity came as a surprise, but I took it," said de Vries.

"I think our pace was very strong today, but it definitely helped to kind of be in command and do our own race.

"I think that makes a huge difference. Today, we didn't really have to fight, we did a clean race, we kept our tyres and energy under control. And you can see the results. So I'm very, very happy with a comeback.

"[Edo] lifted quite early, and I just found myself immediately taking the space in the gap. We didn't lock up, it was quite early in the braking zone.

"So that provided me the opportunity to go for it, and we executed that well. From that point, we were kind of controlling the race." 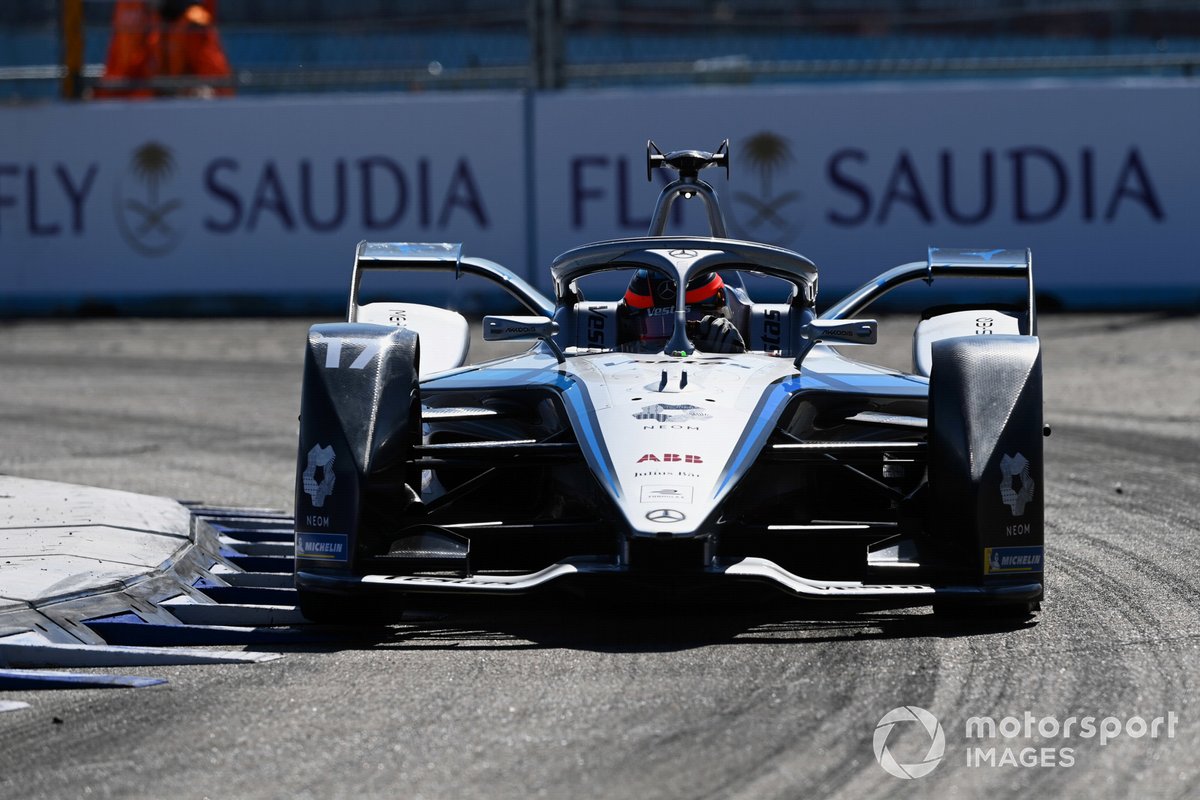 De Vries explained that Saturday's struggles were largely a result of "brake splits" on his car, where the temperatures in the brake discs on one side of the car were drastically different to the other.

That problem was exacerbated by an errant piece of tyre rubber knocking off some of the brake blanking, which ensured de Vries could not make the most of his Mercedes' pace in the opening Berlin race.

"[We had] to change brakes. There was a significant delta between the two brake discs at the front," he explained.

"We were also unfortunate because a piece of rubber hit the brake blanking - there was a brake that was already weak, and that was the side the blanking kind of collapsed.

"The delta was huge. And you know, when when everything is so tight, and it's inducing inside locking all the time on one side, that is enough to just lose one and a half tenths a lap and then suddenly you just don't make that progress.

"That was unfortunate. But again, today everything came back together and we had a great result so I'm very pleased - it honestly is a bit of a relief!"