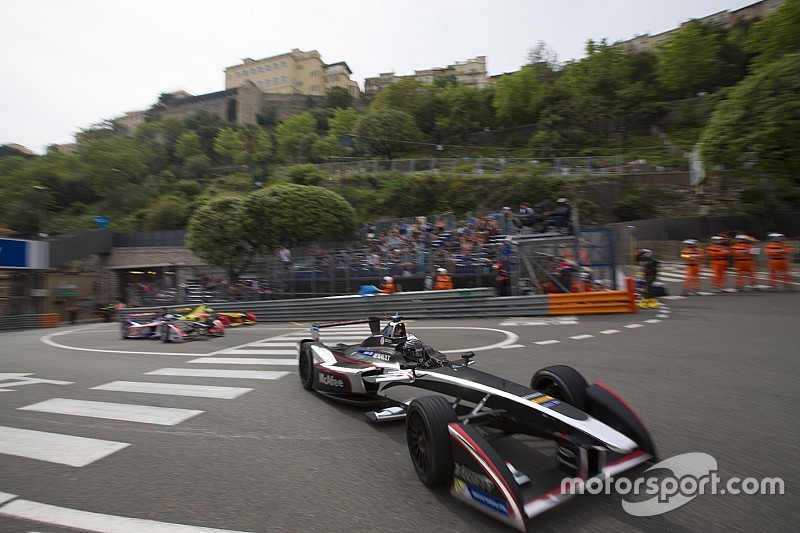 Jerome d’Ambrosio is in the title fight and believes his consistency and momentum from recent rounds could make himself an unlikely FIA Formula E champion.

Speaking to Motorsport.com, the 29-year-old, who won last time out at the Berlin ePrix, is targeting an unlikely title charge in his Dragon Racing Spark-Renault. He currently sits fifth in the points standings, just 26 behind leader Nelson Piquet Jr.

“Anything is possible at the moment. There are a lot of points to play for, especially with pole and fastest lap points added in too,” he said.

“I’m in the title mix for sure and I will just keep on trying to be consistent. I am not the favourite as I am fifth place in the points table, but there is a chance for me,” said the former Marussia and Lotus F1 driver.

“We have some nice momentum going to Moscow and there is no reason why, if we get good points here, we cannot then go on and cause a surprise.”

The Belgian has finished in the points in all but one of the eight rounds held so far and was among the most consistently quick drivers at the last two races at Monaco and Berlin.

On Moscow and the Formula E challenge

The Moscow Formula E circuit is set to be one of the most spectacular, both in its layout and location this weekend. D’Ambrosio, who had just returned from a simulator session when Motorsport.com spoke to him, thinks it will produce unmissable racing.

“It looks really good and in fact reminds me a little of Long Beach,” said d’Ambrosio.

“The right angles are there and also some long straights and at least one hairpin. It will be very interesting. It will produce great races for sure.”

“It could be quite surreal racing so close The Kremlin and Red Square but that’s Formula E isn’t it? The locations have been phenomenal and the different challenges very interesting too. It will make great headlines again for Formula E.”

The Belgian has cultivated an image of a consistent and risk-averse driver in his career and this is a strong suit to his progress in the first season of Formula E. He is also keen to reflect how challenging the Formula E events are for the drivers.

“I don’t think people understand how challenging the cars are to drive and how the strategies happen during the day of all the action,” says d’Ambrosio.

“The braking re-gen, the lack of grip and the energy management really test the driver. You have to be very precise and careful not to over drive. We have seen a lot of really good drivers struggling, so that tells you that pure driving is not enough in Formula E, you have to think about things much more than in other disciplines.

“The format of a one day event is great, really tough. It showed at Berlin (where public paid to attend) that fans want to see it and be part of the future. Formula E are doing things differently and showing a lot of innovation.

“They are looking at the changing world, not just technically but also socially too. It is good to see and I think healthy for motorsport as a whole.”

Renault at full power to Moscow