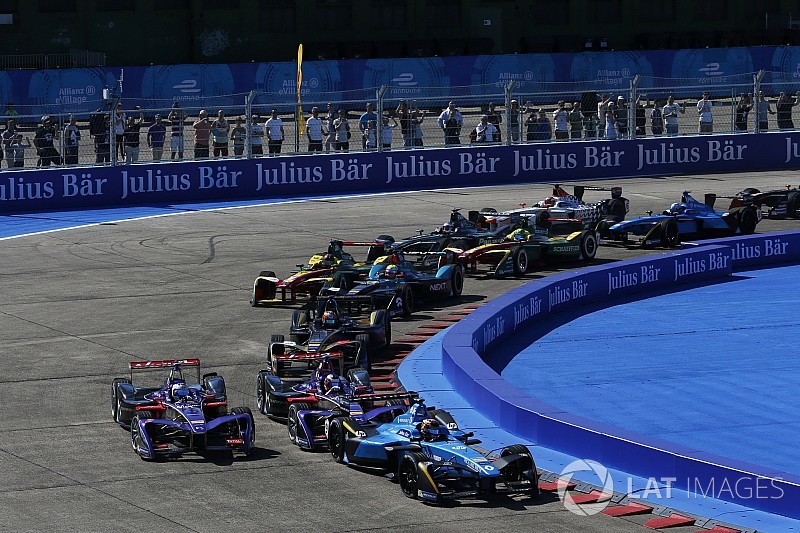 Formula E is nearly three seasons old, and in that time the all-electric series has gone from being seen as a quirky oddity in the motorsport world to a serious, well-respected championship, writes Sam Smith.

Acquired tastes abound in racing, and none more so than Formula E. Since the advent of the championship in 2014, opinions of fans and industry professionals have been spiky to say the least.

The shock of the new often creates whirlpools of cynical opinion, a lot of it often misinformed. It is with some irony that in motorsport, supposedly the most forward thinking and innovative of sports, Jeremiahs and naysayers fester and harshly croon their preconceptions.

Now that the all-electric championship has come through its first baby steps impressively, even some of its fiercest critics now at least respect the way it has first survived and then gathered momentum. There's nothing quite like a long list of manufacturers, and the brass they bring, to loosen breezy snap judgements. 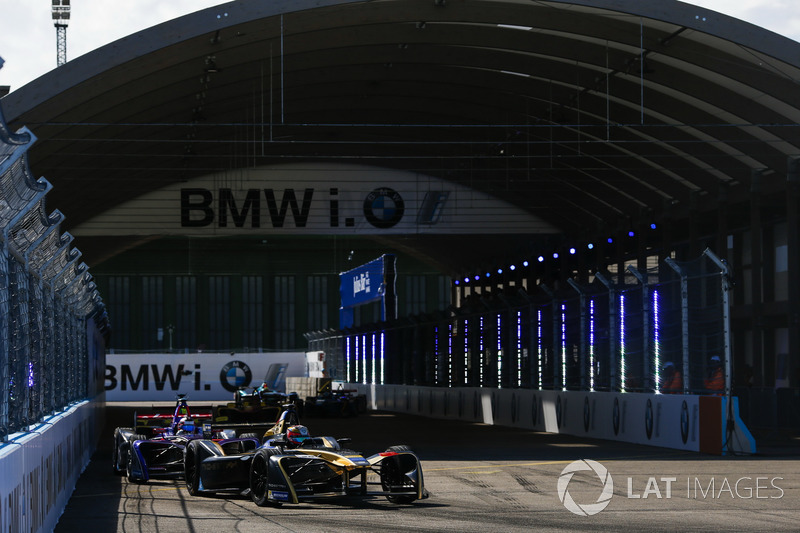 The strongest field in all of racing?

On the sporting side, the acknowledged forecast is that Formula E will only get stronger. With the potency of the driving talent reaching an all-time high in the current season, it seems in keeping with this divisive strand of the sport to now ask a new contentious question - does Formula E now have the most competitive line-up of drivers in global motorsport?

Just a year ago the comedy coughs, wheezes and bile would have cascaded forth. Now though, there are not so many sceptics and there is less irritability around Formula E’s perceptions.

In the words of Formula E’s most recent winner Rosenqvist, a man with experience in a remarkable variety of disciplines in his still growing career: "Formula E is super-strong in terms of competition currently, probably stronger throughout the whole field than anything else out there at the moment."

That’s a bold statement, but one which stands up to scrutiny. When you mix in the fact that the majority of Formula E drivers have - for want of a better expression - been around the block, creating a talent pool not only rich in technical and sporting ability but also one in which many have already worked with top teams and manufacturers, the potency goes deeply beyond mere stats.

It has been the Formula E teams' priority to get the very best available when it comes to drivers. Raw speed is a given in Formula E, but intelligence and engineering aptitude is equally essential.

The strength-in-depth of the driving talent in Formula E is clear and it is something that has not gone unnoticed by many that are following and competing in the still relatively nascent series.

“The talent level is seriously high, there is no doubting that,” says former IndyCar champion Dario Franchitti, who has attended the majority of Formula E races in his role as expert commentator.

“Formula E has come in and gone from having some good drivers to having a truly excellent grid now. I am trying to think of one driver where you think ‘hmmm, maybe not’, but I can’t. They are getting the job done behind the wheel and what most don’t realise or understand is how hard these cars are to drive.” 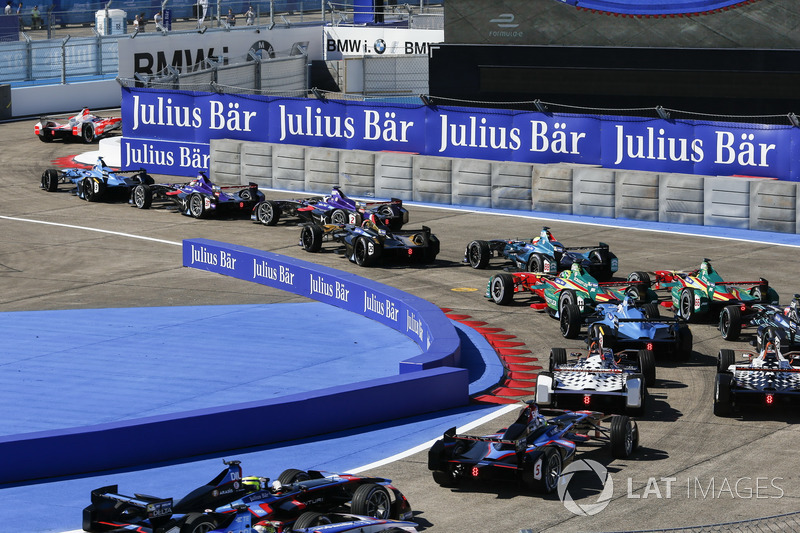 Felix Rosenqvist, Mahindra Racing, leads at the start of the race

Intelligence just as important as speed

The difficulty in getting the maximum from the Formula E cars is something that Jaguar Racing’s Mitch Evans articulates powerfully.

As a rookie coming in to the championship this season, Evans acknowledges a re-calibration as to how one goes racing in the world of Formula E. Mixed with good old hard graft, the Kiwi believes that the quality of the competitors in Formula E is unsurpassed.

“I think as an average Formula E is stronger than Formula 1,” he states. “There is not one driver here bringing money. I think this gives Formula E huge credibility straight away and it gives the team the choice of the best talent irrespective of money.

“These cars are very sensitive and they are far from easy to drive. The re-gen levels and braking techniques you have to master are intense. It is so different to what you are used to and you have to learn really quickly.

"You could take a top F1 driver, and I mean a top one, and put them in a Formula E car and they would need a good amount of time to get to the front of the grid. You’ve got to use your head big time here.”

Intelligence in and out of the car is crucial in Formula E, perhaps more so than other disciplines of the sport. But why so?

It is because, as Evans alludes, the drivers need to adapt to a way of racing so unlike one they had previously experienced. It is that adaptability which makes you get Formula E in the first place and then what it takes to be at the front.

It is something which Franchitti believes gives drivers a particular advantage in Formula E.

“It is massively important with the complexity of the cars in Formula E that a driver is intelligent,” says Franchitti.

“You need that innate intelligence when you watch how quickly they pick up things, which I have seen in drivers across formulas. For example, [IndyCar star] Scott Dixon is incredibly smart in the way he picks things up and understands completely every scenario that is thrown at him.

"In Formula E, I see some very smart guys operating at a high level and under massive stress when they have to race, constantly communicate with their engineers and also get their heads around re-gen, battery management, etc." 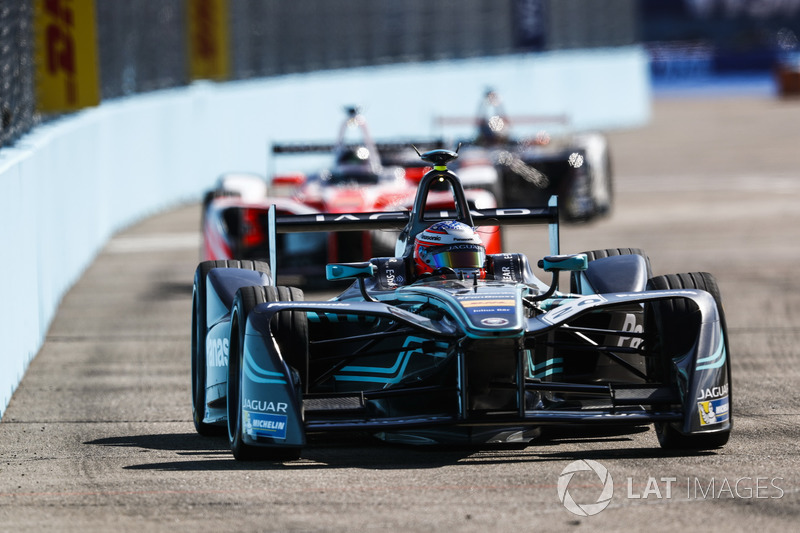 Since the end of season one in particular, Formula E boss Alejandro Agag and his close circle of confidents and advisors have been plotting how they can get what in common racing parlance is known as ‘a name’, i.e. ex-F1, involved in the series.

Sometime Sauber and Haas driver Esteban Gutierrez fit the bill earlier this year when he was rather un-elegantly shoehorned into Formula E, but it didn’t end well.

The Mexican was plainly less than interested in Formula E and was soon bailing out of his deal with Techeetah and taking up an offer to be Sebastien Bourdais’ replacement in IndyCar at Dale Coyne Racing.

“I think Formula E needs a mixture of both hungry young guys and maybe some big ex-F1 names, but for me it is about your enthusiasm to learn a different way of racing,” opines Franchitti.

“If you are going down the route of bringing a ‘name’ driver into Formula E, then make it a big name, don’t bring in a back of the grid guy, look for [Felipe] Massa’s level upwards and most significantly if they have an enthusiasm for the series.

"Don’t target someone who will do it just because they are out of F1 and looking for something to do. For example when Mark [Webber] moved to sportscars he went there because he was so passionate about it and he was passionate about Porsche and it showed, it showed in everything he did.

"That is more important than anything to my mind.”

The awareness of Formula E has changed in its less-than-three-year history. Yes, it is not to everyone’s taste, but quality racing is quality racing, isn’t it?

“There has definitely been a change in perception about Formula E from drivers, teams and actually from everybody I speak to in the industry,” says Franchitti. “They can see the level of drivers and the level of teams, so yes there is more respect for it which is cool to see.

“Negativity of Formula E is now such a weird view. I was talking to someone the other day and they were saying, ‘clearly Fernando [Alonso] going to Indianapolis was better for IndyCar than for F1’, and I said ‘no, it is good for the sport, period’.

"It doesn’t have to be one or the other, I am a racing fan. I am more passionate about IndyCar than most, but I am also a fan who loves all forms of racing.

“Formula E is not going to replace F1, IndyCar, or WEC anytime soon. It is a different branch of the sport which is promoting electric vehicles and allowing the manufacturers to get involved quickly.

"They can race in places we wouldn’t normally get access to otherwise and it has an unbelievably strong field of drivers and it is bloody exciting. What is there not to like?” 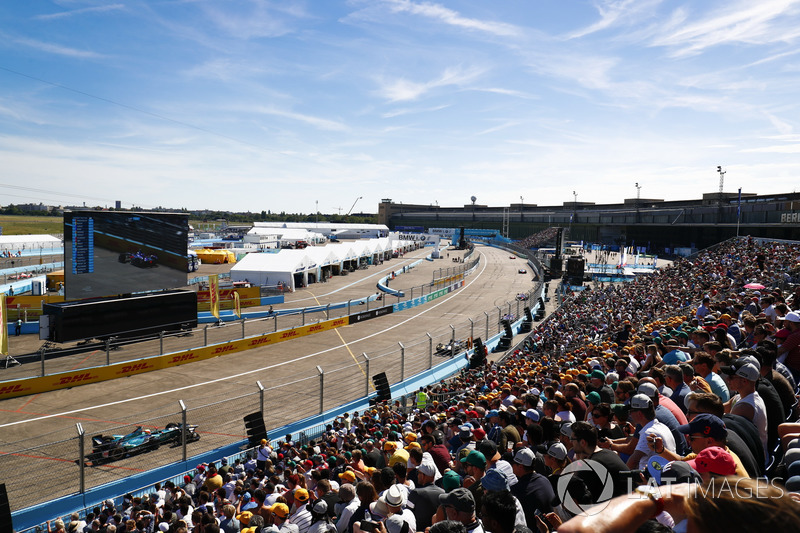