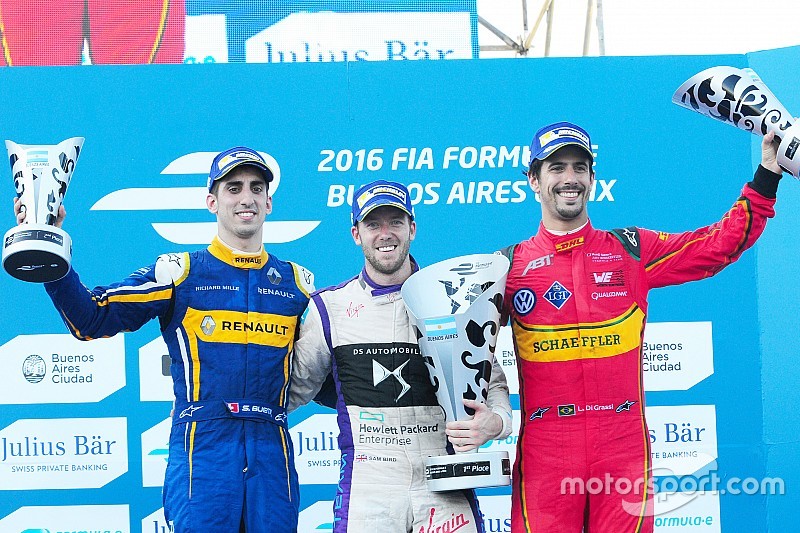 Sam Bird converted pole position into his first Formula E victory of the season in Buenos Aires, just hanging on from a charging Sebastien Buemi, who recovered from last on the grid to second.

Barring one lap during the mid-race car swaps, DS Virgin driver Bird led every tour of the Argentine street circuit to clinch his third career win in the all-electric series by just 0.7 seconds from Buemi.

The Swiss driver, who started from P18 and last after spinning on his hot lap in qualifying, made rapid progress up the field in the opening half of the race, rising to 15th by the end of the opening lap and reaching ninth by the 10 lap-mark.

He emerged from his pitstop up in fourth place, and after a brief Safety Car period to recover the stricken Team Aguri car of Antonio Felix da Costa, Buemi quickly picked off Stephane Sarrazin to take third.

The final few laps boiled down to a three-way showdown between Bird, Lucas di Grassi and Buemi, who was soon able to force his way by chief title rival di Grassi at Turn 1 with seven laps left to snatch second.

Buemi then quickly cruised up to the back of Bird's car, putting the Briton under enormous pressure, but was unable to find a way past in the remaining laps, being forced to settle for second place.

Di Grassi finished third, up from seventh on the grid, maintaining his 100 percent podium record this season, 7.5s down on Bird and just under two seconds ahead of Sarrazin in fourth.

Nicolas Prost completed the top five, having held second behind Bird until he was passed by Felix da Costa at Turn 1 on Lap 13.

He retook the spot when Felix da Costa ground to a halt five laps later, but lost ground with a painfully slow pitstop before then spinning at Turn 4 on his outlap.

Loic Duval finished sixth ahead of Nick Heidfeld and Robin Frijns, who dropped two places on the final lap, while Oliver Turvey passed Bruno Senna on the last tour to take ninth.

Mike Conway had been running fifth after the pitstops on his Formula E debut, but blew any chance of picking up points with a spin, finishing down in 15th.

Buemi continues to lead the championship standings by four points from di Grassi, with Bird moving up to third place with his win, 28 points adrift.