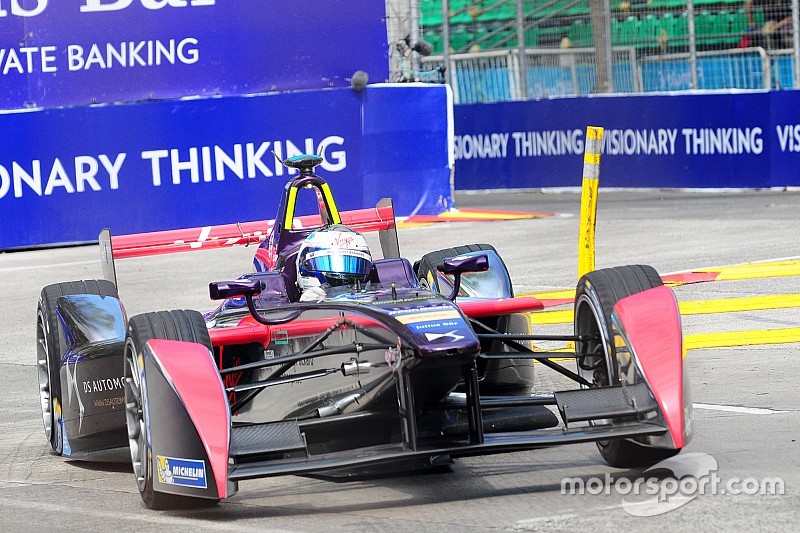 Sam Bird took his first Formula E pole position in qualifying for the Buenos Aires ePrix, as championship leader Sebastien Buemi consigned himself to last on the grid with a spin.

But the Brit turned up the pace in the five-car superpole session, recording a 1m09.420s to put himself three tenths of a second clear of nearest rival Nicolas Prost.

"The aim was a podium, and now that is certainly a reality," said Bird. "We’ll look at the data from practice and work on things for the race, Nico [Prost] is close and their car is not too bad, as we have seen."

Prost just held off a charging Antonio Felix da Costa for second place by a hundredth of a second, with the Portuguese driver booking his superpole slot with a superb lap in the fourth and final group.

Venturi driver Sarrazin couldn't replicate his earlier pace in the shootout, however, and will start fourth, ahead of teammate and Formula E debutant Mike Conway.

After topping second practice, points leader Buemi relegated himself to the back of the grid with a spin during his hot lap in the second group.

The Swiss driver locked the rear brakes of his Renault e.dams machine approaching the Turn 5 hairpin – and will be forced to start the race from 18th and last as a result.

“I won’t find excuses, I just made a mistake,” Buemi said. “Last year I was on pole; this year I am at the back, so we will see what we can do.”

“Realistically there is no way to win, but hopefully I can get some good points for the championship.”

Lucas di Grassi, meanwhile, failed to capitalise fully on title rival Buemi’s woes, missing out on superpole with a scrappy lap in the final group.

The Brazilian starts seventh, behind Robin Frijns but ahead of Abt Audi Sport teammate Daniel Abt, Nelson Piquet Jr and Jerome d’Ambrosio.

There was further drama in the third qualifying group, as both Bruno Senna and Salvador Duran hit trouble on their flying laps.

Senna took too much kerb at the final chicane, bouncing into the outside wall, while Duran smashed into the barriers with a lock-up at Turn 4, destroying his front-right suspension.

The pair will start 16th and 17th respectively, just ahead of Buemi, while Jean-Eric Vergne starts 15th having just been declared fit to compete.