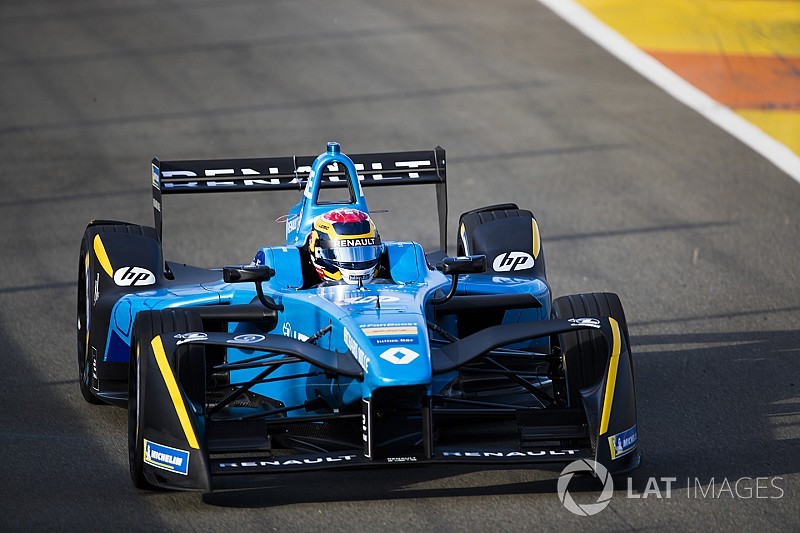 Sebastien Buemi topped the second day of Formula E pre-season testing, setting the pace in both sessions at Valencia.

Lap times were around three seconds slower than on Monday, because of the addition of another chicane on the start/finish straight.

The new left-right chicane has been placed just before the finish line, splitting the straight into thirds.

Buemi’s posted a time of 1m21.890 in the morning and lapped within two tenths of that benchmark in the afternoon.

In both sessions the Renault e.dams driver’s advantage was slim – in the morning Felix Rosenqvist and Sam Bird lapped within a tenth, while in the afternoon reigning champion Lucas di Grassi was 0.158s back in the Audi e-tron FE-04.

Di Grassi was one of few drivers to improve in the afternoon – setting a time good enough for sixth overall, behind day-one pacesetter Oliver Turvey and Nico Prost – as more teams switched to long runs and created a bigger spread of lap times.

The main incident of note was when James Rossiter’s afternoon ended early.

Rossiter crashed his Venturi at the chicane at the end of a flying lap and caused damage to the front right of the car, leaving him without a representative qualifying simulation from his two days of testing.

Mortara was 13th fastest on Tuesday afternoon after giving up his seat in the morning to Moroccan Michael Benyahia, who was the slowest of the day’s 21 runners.