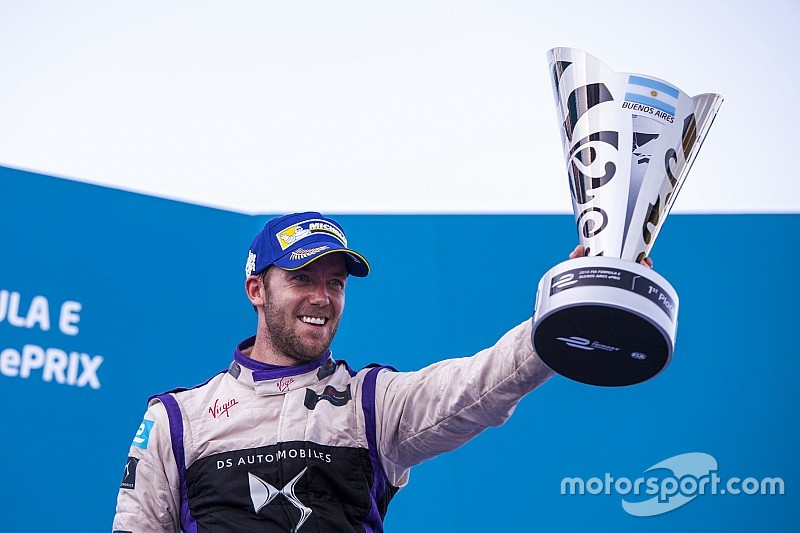 The DS Virgin driver converted his first ever Formula E pole into victory, soaking up massive pressure from first Lucas di Grassi and then Sebastien Buemi during the 35 lap race.

“That was really tough actually, really tough but I'm so thrilled,” said Bird. “I could take it to the big boys, to e.dams and to ABT, and we came up on top today.

"This was a really tough race, the hardest win so far. I need to watch the race back because it was so tough.”

Bird and the DS Virgin team perfectly judged their race strategy and entered the latter stages of the race with enough energy to ward off Buemi.

“I was just trying to get my car as wide as possible and for as long as possible,” said Bird. “I knew he was coming and I think we were quite good on energy actually because I tried to save when they were catching.

"I made some mistakes in those [last] laps, but I gave myself the best shot of victory so I think the strategy worked really well.”

The turnaround in DS Virgin Racing’s fortunes can be traced back to the Punta del Este test just before Christmas, when a full day's testing on a rubbered-in track helped the team’s engineers and drivers understand the car more.

“There were some key aspects that we needed to really work on with the racecar,” said Bird. “There have been issues since season one which are fundamental in a racecar and we still didn't quite understand them.

"The boys at DS, along with the guys at Virgin, got together a good test program at Punta del Este and it made me a little bit more comfortable when I'm pushing and able to understand the car a bit more.

"So it really helped me to give me a bit more confidence and that's what you need as a driver, especially in qualifying when you have one go and you need to understand the car.”