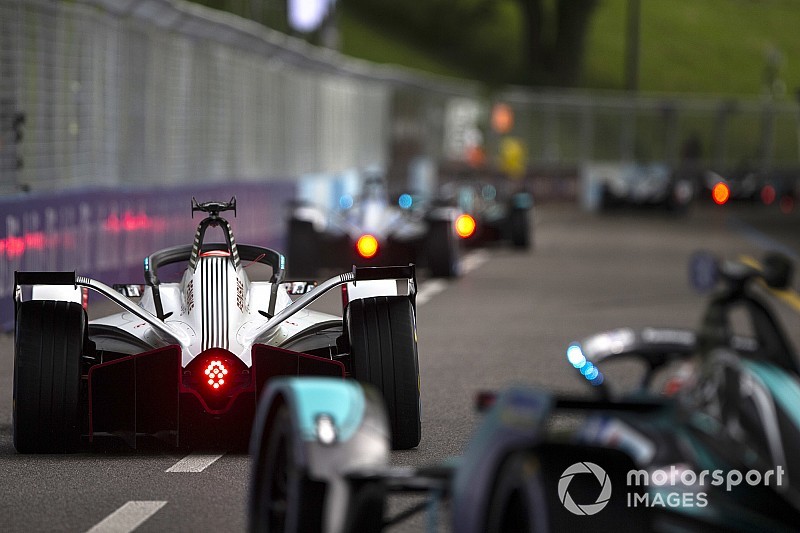 The race start line was placed just after the left-hander of Turn 11, meaning drivers had a long run to the Turns 12-14 chicane before crossing the finish line to effectively start the first true lap.

At the start of the race, Jaguar Racing driver Mitch Evans defended robustly against Sebastien Buemi at Turn 13 in the battle for second, forcing the Nissan driver to slow and concede the battle.

Behind Buemi, Pascal Wehrlein's Mahindra Racing run-car was pushed into the path of Dragon Racing's Maximilian Gunther by Bird, forcing the cars together and causing a roadblock that led to a lengthy red flag delay.

"I just thought it was an accident waiting to happen into that chicane at the start," Bird, who would finish fourth, told Motorsport.com.

"One of the suggestions was [that we] don't do the chicane and just go flat to the next corner [Turn 1] for the first race [lap], but even that's a really tight corner.

"We've seen it before and we're racing these tight, twisty street circuits and we don't have a warm-up lap where we get the brakes and tyres up to temperature like most other series.

"So we're going into these braking zones with everything cold. It can be very, very tricky and, unfortunately, God knows what happened and we all got stuck.

"In the end, it sorted itself out and everybody was able to resume in their normal position. It's a shame but we got through it in the end."

Bird added it was "The trickiest turn 1, lap 1, that I've ever come across".

He continued: "You look at it and you think 'there's going to be a blockage or somebody spinning'. If somebody gets clipped and spins, they block the track and [it's a] red flag. That's what happened."

Gunther impressed in Bern by making superpole and finishing the race in fifth after repairs made under the red flag.

"I was in a sandwich with everybody [at the first corner]," Gunther told Motorsport.com. "I gave the corner to Pascal because I couldn't make the move on the inside.

"He got hit by Sam [Bird]. I got hit by another car behind and was squeezed underneath Pascal's car, completely in the sandwich and there was nothing I could do."

Gunther added that he believed his race was over after the collision because of "huge damage on the front suspension, bodywork, even the rear diffuser was quite broken".

But Dragon made repairs that meant he could continue, with Wehrlein's Mahindra team also using the red flag to conduct repairs.

Wehrlein would later retire after reporting his steering wheel switched off, and he then lost drive at Turn 8 while running in fourth place.